The Summerhill Waste Management Centre (SWMC) has available air space in excess of 14,000,000 m3, an approved tonnage limit of 364,000 tonnes per annum and no time limit on existing development consent.  SWMC will be able to operate until all available air space is exhausted.

Located in Wallsend, west of Newcastle, New South Wales, Summerhill Landfill has operated since 1996. The 264-hectare site, located on the site of an old colliery, receives around 190,000 tonnes of waste of which 60,000 tonnes per annum of general solid waste is from Commercial & Industrial (C&I) sources. In 2011, the City of Newcastle endorsed a Development Application for the Stage Two Development of the Summerhill Landfill Waste Management site. This application extends the life of the current landfill operations well into the future. In order to improve compaction rates and extend the life of the landfill, Brad Wood, Operations Manager at Summerhill, began looking to use machine guidance technology onsite. During his market research, Brad came across the specialist Carlson range of landfill machine guidance products, a competitive tender for the Supply and Installation of a GPS Based Landfill Management System was advertised in November 2013 and awarded to Position Partners in March 2014

In July 2014, Position Partners installed Carlson Landfill Grade Software onto a Dozer and Compactor as well as installing Carlson Fleet Manager Office into the site office.

According to Brad, the initial installation and commissioning, managed by Position Partners, was simple and straightforward.

“Because the site had been checked prior to our investment, the set up was simple, and our machines were working in next to no time,” he said.

“Position Partners were on hand to provide my team with all of the training we then needed to be able to get to work with the new software,” Brad added.

The benefits of using Carlson

Experience on landfill sites around the world has shown the benefits of implementing Carlson Landfill Grade and Fleet Manager Office are vast. In the case of Summerhill Landfill, Carlson products have saved time and costs, and improved production levels.

“The benefits of using Carlson were visible from the start; I would definitely recommend Carlson products to all landfill sites across Australia,” said Brad.

“For the guys out in the field, Carlson Grade has proven to be an important tool that helps them to understand what they need to achieve by the end of the day.

“Through the in-cab screens the guys can see when they have reached grade and can then progress to the next section of garbage; this improves our compaction rate and really does save a lot of time” he said.

Given the lack of additional landfill space within the region, maximising the existing landfill space through high compaction rates is vital to the longevity of the Summerhill site.

“Using Carlson will without doubt prolong the life of Summerhill Landfill, meaning we will be able to compact more waste in the same space,” said Brad.

“By using Carlson you know that you are fully compacted at the end of each day, which means we are maximising airspace and prolonging the life of the landfill.” 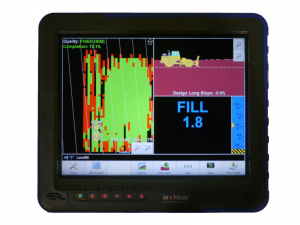 Cost reductions also play an important role in the implementation of this technology. Carlson Grade enables workers and office staff to see when the machine has hit grade.

“The screen in-cab provides real time data which highlights when a machine has reached maximum compaction.

“In the past, a compactor may have continued to make passes over an area to ensure maximum compaction was reached, but with Carlson Landfill Grade this information is provided in real time, meaning fewer passes,” Brad said.

“Reducing the number of passes required to reach grade has also resulted in a significant reduction in fuel consumption, which is proving a highly effective cost saving measure.

“We would have to re-visit the cost-benefit analysis before we could put a monetary figure on the savings from using Carlson – but there are definite savings to our bottom line,” he said.

“In addition, I would say that this system gives us a better trafficable surface; we now get improved preparation and a more even consistent finish to the compacted garbage, allowing us to apply an even rate of cover.”

“In the office, I use Carlson Fleet Manager to monitor what is going out in the field; it is a brilliant tool to check site progress and make sure that the machines are on grade, the cut fills are on track – so this is a really good tool.”

However, Brad did say he faced some challenges in getting to grips with the new system.

“From my perspective, with no survey background, I found learning to understand this software was a fairly challenging process, and required me to put the time aside to learn it,” he said.

“Position Partners were always on hand to provide training to help guide me through the new landfill system, and within no time at all I was up to speed” Brad added.

After the initial set up Brad experienced some teething issues with Fleet Manager Office software.

“However, Wayne was on hand to help troubleshoot and resolve any issues.

“They were resolved quickly and didn’t impact on our production.”

Certainly the challenges in implementing and learning the Carlson Landfill system haven’t deterred Brad from recommending Carlson products to other sites.

“Since installing Carlson Machine control, I have received several calls from other landfill sites who are keen to see how we are progressing with the new technology” Brad said

“Given our experiences, I would recommend Carlson Landfill Grade and Fleet Manager Office products he said.