The innovative company, based in Brighton, Victoria, offers a variety of services using drone technology including structural analysis, thermal imaging, multispectral imaging, 3D modelling and surveying with the analysis carried out by qualified engineers.

“We provide a one-stop shop for customers who require survey work; providing not only the survey flight operated by CASA certified pilots, but also accurate analysis and timely reporting by our team of qualified engineers. ” said Gabriel Cohen, the founder of Omniscan.

Because it was critical that Omniscan select the right UAS for the job, Ryan Kent, Business Development Manager at Position Partners, guided the company through the options available.

“At Position Partners, we offer a range of UAS technology options for a variety of applications,” Mr Kent said.

“We worked closely with Omniscan to fully understand the company’s needs so we could recommend the most suitable UAS to suit their operations and their clients’ requirements.

Omniscan opted for the Falcon 8, a high-tech micro UAS which is ideal for detailed inspection work and aerial surveying, as well as being safe, reliable, portable and easy to use.

“The Falcon 8 is a great size; we can transport it fully assembled so when we arrive on site, we just open the box, insert the battery, and start work,” said Mr Cohen.

In order to maximise the range of applications for its Falcon 8, Omniscan can provide services using additional payload options: a near-infrared camera, a Sony A7R 36 megapixel camera and a FLIR thermal camera. 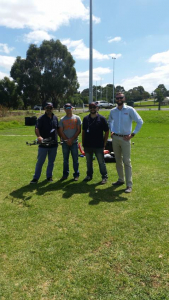 Traditional survey and inspection work generally involves a field survey crew moving between survey points using a standard GPS device. In some surveying and asset inspection situations, accessing locations that need to be surveyed can prove challenging, for example in potentially hazardous conditions, or in difficult terrain.

The use of the latest UAS technology allows Omniscan to put safety first by replacing manual inspections with its detailed aerial inspections.

“Using UAS for surveying work ultimately saves the client thousands of dollars in man hours and can safely inspect assets that might otherwise pose a safety risk to manually inspect” said Mr Cohen.

For example, when using UAS technology for surveying, the flight can be reviewed and extra information abstracted without having to return to site. In addition, if the site is surveyed regularly, a historical database can be complied, allowing visual changes to be readily compared.

The AscTec Falcon 8 comes with a fully integrated software solution, which enables aerial images to be tagged, and flight data to be georeferenced during the flight.

The Falcon 8 also streamlines the workflow, enabling the pilot to plan the mission before take-off, define the survey zone, ground resolution and photo overlap, and the number of waypoint and positions to include.

It even provides the ability to export the flight data while still in the field.

“Using the Falcon 8 for our asset maintenance and inspection work means we can provide real time data to our clients and show them clearly and quickly which areas need to be attended to immediately,” Mr Cohen said.

The Falcon 8 flight system sends all flight data to a mobile ground station in real time, so that all visual and acoustic signals are available during the flight.

Learning and adapting to this new UAS technology was not a challenge for Omniscan.

“The level of support and service we have received from Position Partners has been excellent; they are always on hand to help if we have any issues, which is an important feature for a new business such as ours,” said Mr Cohen.

The company’s CASA-certified pilot was provided with training specific to the Falcon 8 by Position Partners to familiarise him with its operations.