Statewide Kerbing is a Sydney-based, family owned company that specialises in slipform paving and kerbing throughout New South Wales. The company has 25 employees and operates a fleet of six slipform pavers, including four Power Curbers, one Miller M1000 and an Arrow 750XL.

With more than 40 years of industry experience, Brian Scattergood has seen dramatic changes in the use of technology in recent years. He attributes the company’s adoption of new technology to his son and business partner, Warren.

“I am more traditional I suppose and I find it harder to get my head around the technology than my son does,” Brian said. “From encouraging me to purchase our first slipform paver in 2000, through to adopting machine control technology this year, Warren continues to push the latest techniques to improve efficiency and productivity. Our business has grown and won more work as a result.” 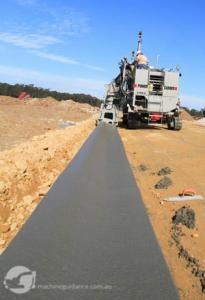 “This is our first venture into machine control and so far I am very impressed with its performance and accuracy,” Brian explained. “I went out on site to see it in action and was amazed to see it produce 2-3mm accuracy on chicanes. The chicanes were shaped to perfection and it was like watching a CAD design come to life – I couldn’t have hoped for better,” he added.

The Topcon-fitted Power Curber is currently on its first job for TRN, completing subdivision work at Oran Park in Sydney’s South West.

“Like any new technology, it was daunting to begin with,” said Warren Scattergood. “But we have had excellent training and support from Position Partners, Topcon’s Australian distributors, and I am sure we will get faster and more efficient using it as time goes on.

“Our client TRN has also been very helpful, offering to give us a hand if we need it as they have a lot of experience with Topcon systems, which they have fitted to many of their own machines,” he added. “TRN originally suggested the idea of machine control to us and have been supportive of our decision.”

Using the Topcon system eliminates the need to set out stringlines as the machine automatically runs to the design loaded into a control box, mounted next to the control panel. This alone will save Statewide Kerbing huge amounts of time and labour.

“You don’t get paid for setting out, managing and packing up stringlines,” Warren said. “With this stringless system from Topcon, if we’re aiming to complete 500 metres in a day we get to pour concrete two and a half hours earlier because we don’t need to spend three hours setting out pegs in the morning.”

“Instead of having more guys out the front of the machine setting out pegs, we will need more behind it doing the finishing because the machine can pour out concrete that much faster,” he added.

In addition to saving time, stringless technology enables the crew to keep working if they are running ahead of schedule. “Without this system, we would be limited by the stringlines you’d set out in the morning,” Brian said. “If you’re getting good concrete service and you complete the section you’d pegged out for the day, you’d traditionally stop there. With this new setup, we can keep going and make the most of those good days to stay ahead of schedule.”

Employee health and safety is also high on the company’s priorities. “Staking pegs in the ground over a long period of time can result in Repetitive Strain Injuries (RSIs),” Brian said. “By eliminating stringlines with machine control, we can help to keep our employees safe and free from injury.”

Staying ahead of the game

Machine control is becoming increasingly commonplace on construction sites for machines such as dozers, graders and excavators. For slipform paving, however, take-up of the technology is still in its infancy.

Unlike most machine control systems for slipform and asphalt pavers that utilise a complex total station setup to achieve the tight tolerances, Topcon is the only company in the world to offer a millimetre GPS solution.

The Topcon system utilises a high precision, Lazer Zone™ transmitter in addition to GPS positioning to achieve millimetre accuracy for paving applications. “It takes just a few minutes at the start of the day to setup the laser and you can begin pouring concrete straight away, without any further adjustments required,” Mr Campbell added.

“By adding a millimetre GPS rover such as the Topcon HiPer V to the setup, all the set-out and levels can be checked days in advance across areas that are being prepared for the paver,” he added. “As soon as the machine has completed one section, it can move straight onto the next without delay.”

Shane Dunstan from Aran sees millimetre GPS technology as the future for the industry. “In the United States and Canada this technology is utilised a lot more than it is in our region,” he said. “Power Curber and Topcon first worked together on an integrated solution in Canada and as a result Aran has been working closely with Topcon’s Australian distributors, Position Partners, to deliver the same technology to our mutual customers.”

Warren Scattergood believes Statewide Kerbing is setting a new standard for slipform paving with the Topcon-fitted Power Curber. “Now that the technology has been proved to us, it’s time to prove its capabilities to our clients,” he said.

“We are looking forward to using it on major projects and barrier walls, where we think we’ll see significant time savings and cost benefits. On some of our recent barrier wall jobs it has been challenging to complete the work as the tight spaces left little room for stringlines. I’m looking forward to the next job being stringless!” he added.