Blog - Latest News
You are here: Home1 / Case Studies2 / Take a load off

Take a load off

Brenton Simpson manages two Hanson quarries in Victoria, one in Tarrawingee in the North East and another in Moama, on the New South Wales border. Although neither quarry has a weighbridge on site, Mr Simpson says he has minimised risk and increased accuracy thanks to the introduction of on-board weighing systems.

Some 18 months ago Mr Simpson installed Loadmaster loader scales on two Komatsu loaders to track movement of raw material through the plant as well as ensure road trucks were loaded within legal tolerances. 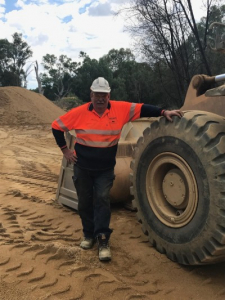 “In addition to increasing the accuracy of every load moved through the site, the loader scales have given us better reporting of material movement and minimised risk by accurately loading road trucks,” he said.

Once a week, trucks are sent to a private weighbridge to cross check the weight accuracy. “It is very rare for a truck to be out of tolerance,” Mr Simpson said.

Mr Simpson said that tracking materials through the plant helps to minimise paperwork and increase productivity on site. “Every time an operator picks up a bucket under a conveyor belt and moves it to a stockpile, it is recorded and provided to me on a monthly report,” he said. “I can easily keep tabs on stock levels and how much material is in each stockpile.”

When asked why he opted for the Loadmaster scales over other brands, Mr Simpson explained that local support from Australian distributor Position Partners, was a deciding factor. “We looked at the ease of the use of the system first and foremost, and the Loadmaster seemed a very user friendly system.

“Having the support of Position Partners in Victoria is also very important,” he added. “After visiting us for on-site training to get us up and running, the team is very responsive if we ever come into technical issues and they can also login remotely which saves a lot of time as you don’t have to wait for a technician to arrive on site.”

On the other side of the state in Winchelsea, Ryan Davis is the third generation manager of Armytage Quarry, operated by family-owned R.A.K Davis & Sons.

Six months ago, the company also invested in two Loadmaster α100 systems for its Volvo and Komatsu loaders and Mr Davis said it has been a great improvement by minimising paperwork and enabling the company to accurately transact by the tonne rather than the metre.

“The loader scales mean we can keep up with the times and accurately transact by the tonne,” Mr Davis said. “It also gives us an accurate record of what material has gone and where, so we no longer have to sift through paper dockets when a client calls because we have their order history on the screen straight away.” 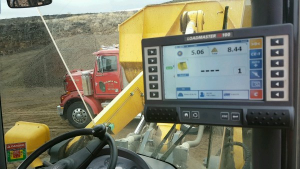 Mr Davis said that the technology has been embraced by all his staff, largely due to how easy it is to use. “We have a 50/50 split between the younger generation where the use of technology is second nature, and the older generation that need a little more proof before they trust it,” he said.

“We’ve found everyone has really got on board with the loader scale system because it’s easy to use and also very reliable,” he added. “We also bought the printer option which means the operator can print out a record inside the cab.”

R.A.K Davis was first introduced to loader scales when it took delivery of the company’s new WA480 Komatsu wheel loader. “Komatsu recommended Loadmaster on-board weighing systems as a good addition to the loader to increase productivity and reduce wear on the machine by loading accurately each time,” he said.

“When I learnt that the RDS Loadmaster is sold by Position Partners, who have two branches in Melbourne, I was happy to go ahead with fitting systems to the new Komatsu and our Volvo as I knew we’d get local support. Sure enough, they’ve been great getting us up to speed and can normally solve any technical glitches over the phone” he added.