Blog - Latest News
You are here: Home1 / Case Studies2 / Topcon has the edge

Topcon has the edge

Cairns-based construction firm chooses Topcon for accuracy, ease of use and flexibility

Kenfrost is a mid-sized construction company that specialises in residential building development in Cairns, with a civil construction division that offers road and other earthmoving services.

The company operates two graders and runs 3-4 construction and survey crews. Grader operator Matthew Byl has worked for the company since 2009 and explains why they opt for Topcon and how upgrading to the latest mmGPS machine control technology, along with a brand new CAT 120M AWD grader, has resulted in huge productivity improvements for the business.

Why Topcon comes out Top

Mr Byl explained that although he’s been loyal to the Topcon brand for many years, he hasn’t done so just out of habit. “When we purchased this new CAT grader we were open minded and we did look seriously at upgrading the existing system that it comes with in place of Topcon,” he said.

“But when I had a demonstration and really compared the two, I wasn’t convinced that the other brand would offer any advantages and in fact there were a few key differences that made Topcon a clear winner from my perspective,” he added.

Mr Byl explained that Topcon is the only system on the market that can deliver fine precision grading using laser and GPS technology together at the same time. “What’s great about it is that even if you briefly lose line of sight with the laser, the GPS will keep you working so you don’t lose everything.

“Other systems rely on robotic total stations, which aren’t linked with the GPS technology so when you lose line of sight – which everyone does at some point as it’s just the nature of the job – you have nothing,” he added. 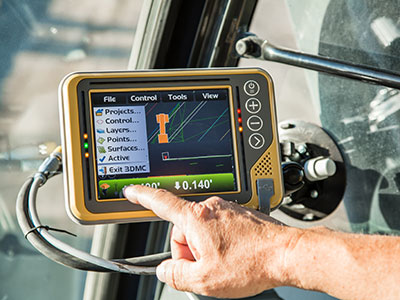 Mr Byl said he likes the fact that Topcon technology uses GPS at the core of its systems and supplements it with other technology such as lasers and robotics to increase accuracy.

“The fact the technology works together makes it more flexible for all sorts of different applications, without losing accuracy,” he said. “Other systems seem more cumbersome to me, as though you’re operating two types of technology independently from one another.”

Mr Byl has been using machine control technology since its early days and has experienced firsthand its evolution. Agtek, which was acquired by Topcon in the 1980s, invented the first 2D machine control system that enabled operators to grade cross slope and other complex designs. Later Topcon added Sonic Tracking technology that allowed the operator to follow the stringline with multiple grades and changes in level.

“I was working for a company in Western Australia when I started using machine control technology, the first being an Agtek System 4 which later evolved to the more sophisticated Topcon System 5 that is still popular today,” Mr Byl said.

Commenting on the difference between 2D and 3D machine control, Mr Byl said: “2D is fantastic technology and it certainly makes your work a lot faster, but you are still reliant on others in the team for grade checking.”

“I find that with the 3D system I have everything I need to work independently without waiting for surveyors to peg out the design or check grade,” he added. “I can also start and finish the job where I want to, I don’t have to work areas that the surveyor has already set out as I have all the data I need on the screen in front of me.

“Personally I still run a stringline at the end just for my own peace of mind, but it’s not something I need to do!” 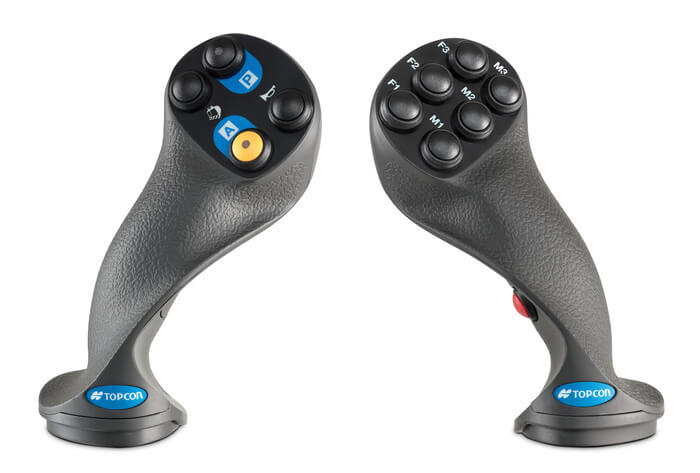 An added advantage of direct connection to the machine’s CAN system is the ability to use the CAT joystick without adding additional controls.

“As an operator, I was impressed that Topcon could make use of this new joystick design. This way all the auto buttons and grade adjusters are part of the joystick, allowing me to keep my hands on the controls at all times,” Mr Byl said.

Automatic side shift is a new feature that Mr Byl explains makes road work significantly more efficient and accurate. “When boxing out curb, the system now has a feature that enables you to automatically side shift the position so that you follow the line of the curb exactly,” he said.

“Previously we would sometimes have problems when the team came to lay the curb and the line not being correct, which was usually an operator error somewhere along the way. This removes the risk of human error and makes it a lot more precise and faster to grade,” he added.

Other benefits of the new system include a faster, modern Topcon GX-55 control box that also features three integrated LED light bars for a quick visual reference to grade. “Our other system was five years old so as with any computer, the newer one is much faster,” he said. “I love the light bars as well, I’d got used to them on the 2D system and it’s great to have them back on this new version just to keep an eye on how I’m tracking to grade.”

Topcon’s mmGPS solution has the option of using either a single or dual GNSS antenna setup. Kenfrost’s original system had a single antenna, but on the new one the company opted for twin GPS and is realising increased performance as a result.

“The single antenna system we had previously was extremely accurate, but I think the dual antenna setup has the edge especially if you’re working in tight spaces,” Mr Byl said.

“I love the fact that keeps up with you just as well in reverse as it does when you’re going forward”.

Although I don’t grade in reverse, with the single antenna you’d have to drive forward for a few metres before it would lock onto your position, whereas the dual system always knows exactly where you are, no matter how small an area you’re in or how often you switch direction,” he added.

Another advantage Mr Byl highlighted with the twin antenna setup is the ability to pitch the blade forward and still maintain good accuracy from the GPS. “With the single antenna, it needs to remain perpendicular to the blade to maintain accuracy, so you need to keep working at the same pitch,” he said. “But with the twin setup, I can adjust the pitch a bit to give me a sharper point on the cutting edge for work on hard surfaces, whilst still maintaining fine precision accuracy.”

Mr Byl highlighted the excellent service and support the company receives from Topcon’s Australian Distributor, Position Partners. “I was very impressed with the gentleman who installed this latest system. I worked with him whilst installing it, and I was very happy with the attention to detail that he had and to the overall presentation of the installation, particularly the wiring harnesses which can sometimes be challenging to get to looking neat and tidy.”

“Just last week I ran into a problem whereby the control box froze on me,” Mr Byl said. “The support team in Brisbane was able to logon immediately to run some diagnostics and update the system to the latest software. Within the hour I was back up and running, so it saved a huge amount of time and I’ve had no problems since.

“It’s great to have the support of a professional team behind the technology that can assist us when need be,” he added.