Despite the increased demand for machine control on earthmoving plant for major projects, Daniel Buttigieg from Mulgoa Excavations in Sydney has been somewhat reluctant to invest in the technology due to the costs involved.

“It’s definitely the way the industry is going,” Mr Buttigieg said, “as a plant hire company, we are increasingly asked to supply machine control systems with the machines, especially with the large contracting firms.

“Although it is an investment to adopt machine control, we do get higher rates for the GPS that help to recoup the costs, plus we win more work for them due to demand for the technology,” he added.

One of Mulgoa’s zero-swing Komatsu PC-228 machines is currently working on the ETTT rail expansion project in Sydney’s North West. 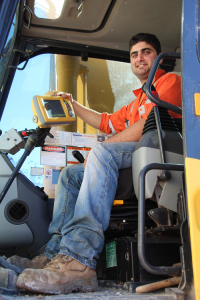 “We were asked by the client to install machine control because of the very steep batters on the job, which make it impossible to use stringlines,” Mr Buttigieg added. “I did my homework to find the right solution and asked my peers and the client for their advice. Topcon was recommended as the most reliable and easy to use option, so I got in touch with their Australian distributors Position Partners.”

Mr Buttigieg chose Topcon’s newly released 3D GPS X-63i excavator system and became the first contractor to deploy the new solution in Australia. Unlike most 3D GPS machine control systems that are designed to work with the machine hydraulics in automatic mode, for high tolerance applications such as grading, the new system for Topcon is the first 3D solution to be specifically designed for excavators.

By eliminating the more complex hydraulic components, which are not required for an excavator as the system is used in ‘indicate-only’ mode, contractors save around $20,000 on a machine control system.

“The different price point for Topcon’s new system was definitely appealing,” Mr Buttigieg said. “That plus the fact that Topcon is renowned for being the best brand, along with the support we get from Position Partners, made the decision an easy one.”

“Position Partners was very cooperative when it came to installing the system and they have helped us with product training and support whenever we need it,” he added. “We also had a warranty issue with the screen of our track loader machine control system – they fixed and replaced it without any problems. I’m very happy with the service we receive from them.”

Chad Preston, one of the site foremen on the ETTT rail expansion project, says machine control has had a very positive impact on the project. “The safety aspect on a job such as this is paramount, as we’re working in a narrow space next to operating railway lines,” he said. “Machine control means we need fewer surveyors working near the machinery – they simply set out the initial benchmarks, leave the operators to get on with the work and come back to do final checks.”

Mr Preston said that machine control helps to keep the project running efficiently because the machines are working accurately, quickly and reliably to the design of the project.

“I was impressed with Daniel from Mulgoa’s cooperation with us to install machine control for this job,” Mr Preston added. “We rely on our sub contractors to have the right systems and it makes a project run a lot more smoothly when they do.”

Operator Paul Refalo had no prior experience using GPS machine control before working with the new Topcon X-63i system, but has had no trouble adapting to it. “I think it’s awesome,” he said, “I just set in my benchmarks at the start of the day and I can clearly see where I’m up to and how much further I have to go on the screen in front of me. There’s no need to stop and check anything, I can just get on with it.”

Although it’s still early days, Mr Buttigieg is pleased with his latest venture into machine control. “It’s been working brilliantly at the ETTT rail project and the client is very happy,” he said. “I’m looking forward to winning more jobs with it and possibly expanding our machine control fleet in the future, provided the increased rates for GPS are still there!”