Blog - Latest News
You are here: Home1 / News2 / Position Partners3 / A flight for life: racing to help our Flying Doctors

A flight for life: racing to help our Flying Doctors 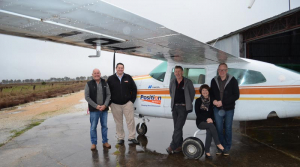 Working in civil construction and mining can take you to some pretty remote areas of this great country. Here, we share the stories of two Position Partners customers who have been on both the supporting and receiving end of the Royal Flying Doctor Service.

Two longstanding Position Partners customers, Gary McClure from Castlemaine, Victoria, and Peter Mitchell from Adelaide, have been on both the supporting and receiving end of the Royal Flying Doctor Service (RFDS) respectively and see it as a critical service for the civil construction and mining industries.

A Flight for life

Peter Mitchell, owner of contracting firm PDM Contracting, knows only too well the importance of the Royal Flying Doctors having suffered a heart attack while on site at a mine near Newman, Western Australia, two years ago.

“I owe my life to the Flying Doctors and I do everything I can to support them,” he said.

Specialising in earthmoving and road works for the mining industry, Peter has spent most of his career working in some of the most remote areas of Australia, where every service from mobile phone signal through to medical aid is hard to come by.

Contracted to complete road works at the mine near Newman two years ago, Peter was relieving one of his employees and operating a grader on a four-week-on, one-week-off roster. About two weeks into one of the rosters, Peter woke in the early hours one night in excruciating pain, but didn’t want to alert the First Aid officer for fear of getting kicked off the site.

“It’s silly to think that was my priority initially, but eventually the pain was just too much and I had to call for help,” he said.

“The First Aid officers aren’t authorised to prescribe anything stronger than aspirin, which weren’t doing anything to help me. They drove me to Newman hospital where it was confirmed I had suffered a heart attack.

“Luckily the Flying Doctors were almost overhead at the time with another patient already on board. They landed at Newman and I was picked up and flown at low altitude to Hollywood hospital in Perth,” he added.

Peter needed to have surgery to put a stint in his heart and has been in good health since.

“I was just given the all-clear for another 12 months by my cardiologist and it’s all thanks to the Flying Doctors that I’m still here,” he said.

Racing in the outback

With almost 20 years’ flying experience and a successful career as a civil engineer, Gary McClure is no stranger to the demands of precision and careful planning. In 2012 he completed his first Outback Air Race and is set to take to the skies again this month alongside teammates Greg Barkla and David and Lyn Mayo who together make up the team ‘3 Pies with Sauce.’

“I stumbled upon the race online a few years ago and it appealed to me for three reasons,” Gary said. “First and foremost, it supports the Flying Doctors, second it takes you over some interesting country, and third it gives you an opportunity to spend time with fellow aviation enthusiasts and like-minded people.”

This year’s course takes participants diagonally across the country, starting in the South West at Esperance on 23rd August and finishing in the North East at Hamilton Island on 4th September.

The race is less about getting from point A to point B the fastest, and more about completing each of the eight legs of the race as accurately and as close to a team’s nominated time and flight plan as possible.

“As a team, you nominate the time you think it will take to complete each leg and you must pass as close as possible over the designated start and finish points,” Gary explained. “In between those points you can deviate wherever you like to take in the scenery, visit friends, or whatever.”

Each team is given GPS equipment to assist with flying over the designated start and finish points, with points lost for deviation, as well as points deducted for every second early or late over the check point.

“Some of the teams include ex-RAF pilots who come within five or six seconds of their nominated flight times, so if you’re not completing the leg within about eight seconds of your time, you’re not in the race,” Gary said.

The emphasis of the event, however, is very much about keeping the ‘fun’ in fundraising. Although prizes are awarded at the end of each leg for accuracy, there are numerous daily prizes awarded for categories such as ‘cheerfulness’ and ‘anything else that takes the fancy of the race committee on the day.’

“It is a wonderful event for an extremely worthwhile cause and we have a lot of fun along the way,” Gary added. “Having worked throughout Australia as a civil engineer and often in some pretty remote areas, I know first-hand what a vital service the Royal Flying Doctors provide to our industry.”

The team will be flying in a Cessna 210N aircraft, complete with Position Partners stickers. “Bob Bent and the team from Position Partners have been a fantastic support to us over the years, so adding some stickers to our plane this year was the least I could do,” Gary said.

For more information about the Outback Air Race and to make a donation, visit www.outbackairrace.com.au