Congratulations to Garry and Bob for industry milestone celebrations! 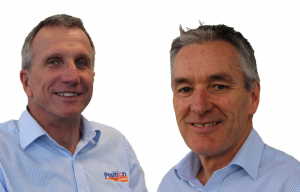 Without these guys, Position Partners wouldn’t be what it is today. Garry Fleming and Bob Bent are two of the company’s founders, who alongside their colleagues helped to form a single business from five state-based firms in 2008.

Celebrating 30 years in business and 40 years in the industry respectively, we threw Garry and Bob a couple of celebratory parties to acknowledge their significant contribution not only to our company, but the technology we support and the industry overall.

In New South Wales, Garry Fleming and Brian McLoughlin started LaserQuip in 1987, taking an enormous leap of faith and following their passion to increase productivity on the job site with laser and machine control technology. Brian’s dining room was their first office and a beaten up 1968 Holden Premier their shared company car.

30 years on and Garry is now our NSW and ACT Regional Manager, as well as Partnering Services Manager where he heads up our service, support, training and hire capabilities company-wide.

Sadly Brian is no longer with us to celebrate alongside his business partner, having lost a battle with cancer in 2016. To recognise all that he contributed, a plaque for Brian has been created that will sit in pride of place at our Sydney office.

On 8th May we threw Garry a surprise lunch celebration with 100 or so of his colleagues, family and customers, many of whom had travelled from far and wide to make it.

Now, keeping a secret from Garry is no mean feat – his eagle eye for detail and close working relationship with everyone in his team means he’s tapped into everything! But with a lot of effort and everyone living in fear of spilling the beans and ruining all the hard work, we managed to pull it off. The look of genuine surprise and seeing his smile broaden as he recognised one after another of the faces in the crowd made it all worthwhile.

With congratulatory messages from Martin Nix, our CEO, along with a video speech from Jamie Williamson, Vice President of Topcon Positioning Group and a few classic early days photos, a great afternoon was had by all. We also presented Garry with a little sketch that brings together two of his great passions – surfing and laser levelling technology! Congratulations Garry!

In Victoria, we celebrated Bob Bent’s 40 year contribution to the construction industry. As Bob heads off for a well earned break (although we can’t picture him taking it easy and playing chess), we celebrated with customers, family, friends and colleagues alike to wish him all the best for his retirement and a huge thank you for all he has done for everyone who’s had the pleasure of working with him.

Bob’s passion and energy for our business has truly been second to none. His positive can-do attitude and great head for business helped him to build Laser Beams alongside his equally talented wife Janine. After Position Partners was formed in 2008, Bob went on to lead the Victoria and Tasmania teams as Regional Manager and more recently, project managed the successful creation of our wholesale distribution division for laser levelling tools and establishing our New Zealand business.

With heartfelt thank yous from countless customers, colleagues, friends and family from all over Australia as well as our Topcon friends in the States, Bob was brought to tears to see so many people recognise his help over the years.

Like Garry, Bob also has a great love of laser levelling technology, so his sketch combined this passion with his favourite hobby – heading out for a ride on his BMW motorbike! Congratulations Bob on such a wonderful career and all the best for your retirement. Don’t be a stranger!