Crane accuracy is booming with Topcon 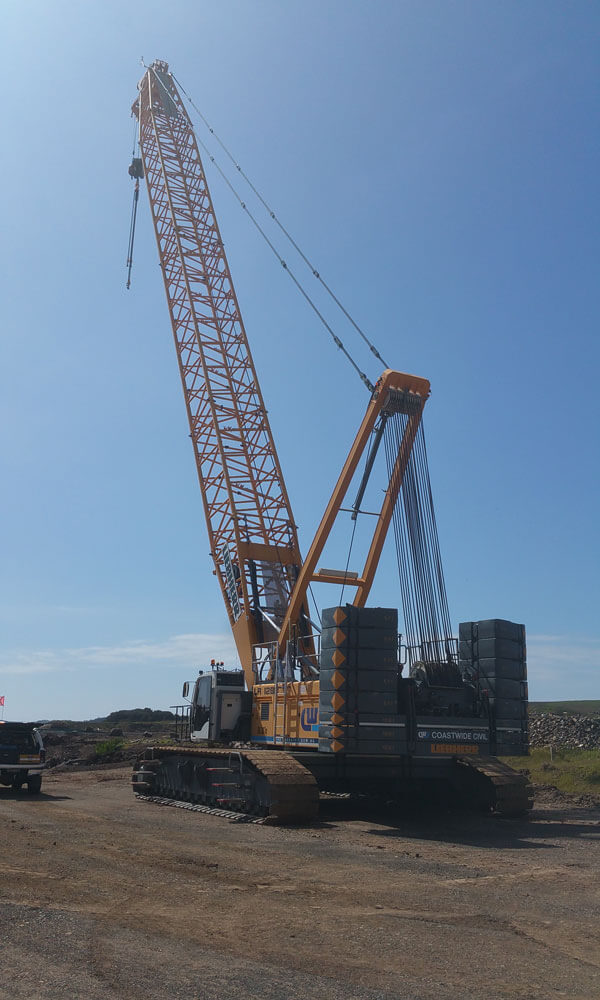 Building Shell Cove marina on the NSW south coast involves multiple complex designs and testing the limits of machinery and positioning technology to deliver the project accurately and on schedule.

Coastwide Civil is the main contractor for the job and has invested in a Liebherr LR1280 sea crane to construct the break-walls for a 300-berth marina and in-shore boat harbour.

As the design includes multiple shelves, levels and troughs, along with a variety of different materials, knowing that the correct material has been placed in the right location is paramount to the job’s success.

NSW Field Services Manager Gary Campbell, commented: “There have only been a couple of other installations of this type in the world, so it was exciting to have the opportunity to see firsthand what is possible and the initial results are extremely promising.”

Unlike traditional crane positioning systems that involve mounting GPS antennas, sensors and cabling to the machine’s boom, Topcon and Liebherr’s development team partnered to create a solution that enables the Topcon positioning technology to talk directly to the machine and keep all positioning components away from the working end of the machine.

“Keeping the antennas, sensors and associated cabling away from the boom and moving parts of the machine is paramount, not only to maintain consistent accuracy but also to reduce exposure to the elements and salt water,” Mr Campbell explained.

Mr Campbell added that maintaining precise positioning with such long distances from the positioning sensors, whilst compensating for current, wind and the sheer size of the boulders being placed, is no mean feat.

“The crane is able to move a ten-tonne boulder in a single grab, which means it’s going to move in the wind and water and the positioning technology needs to compensate for that,” he said.

“Topcon’s software also measures from an array of around eight points for each rock rather than just one, because one point isn’t going to give you accurate data on a boulder that’s a couple of metres across,” he added.

To complete the reporting loop, Coastwide Civil has introduced sonar measuring technology to scan the bottom of the sea bed and sea wall to produce a render of the different levels. The sonar data is then transferred back to the Topcon machine control system using Position Partners’ Tokara telematics technology.

“Using the sonar technology in conjunction with Topcon machine control enables accurate as-builts to be captured and fed back to the crane to keep the design on track with minimal re-work,” Mr Campbell said.

“It’s a great result to see what can be achieved through cooperation between Topcon and Liebherr’s engineers, local knowledge and experience and a customer who pushes the boundaries to find a better way to build.”