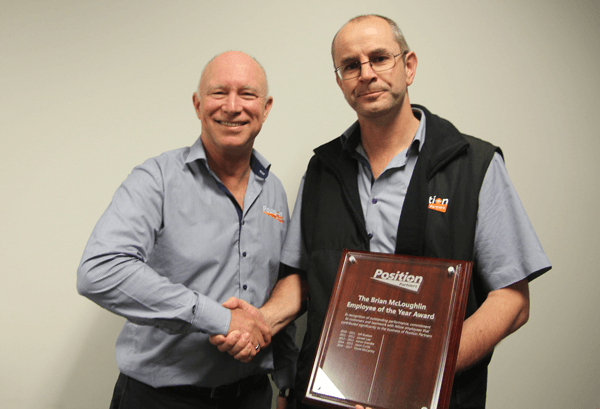 David McCarthy, who manages Position Partners’ Tasmania branch in Launceston, has been awarded the Brian McLoughlin Employee of the Year Award 2016-2017. Presented in recognition of an employee that has gone above and beyond in their role and responsibilities, all employees were asked to cast their vote based on the following criteria:

David was chosen because he has achieved a significant gain of new customers in Tasmania since he started with the company in September 2009,” said Martin Nix, Position Partners CEO. “Being outside the major offices requires a “multi-tasking” capability of sales, support and administration as well as significant communication work to actively make the branch part of the whole company rather than a remote outpost.  For Launceston, David has created significant success on many counts and he is highly respected and valued by his colleagues and our customers alike,” he added.

This year was the first to honour the memory of Brian McLoughlin, one of the founders of Position Partners who passed away in January 2016. From this year onwards the award will be called the Brian McLoughlin Employee of the Year Award.

Accepting his award at a surprise morning tea in Campbellfield, Victoria, David said: “I would just like to say a big thank you to everyone at Position Partners and in particular to all who voted in this year’s award process, and all staff that received votes. I truly believe that we are all part of a greater team, that we all have an equally important role to play in this great company. We should all be extremely proud of the company that Position Partners has grown into.

“There is nothing more humbling than to receive recognition from your peers, for the effort and commitment of the last eight years. I could not have got to where I am today, without the support and backing of some great people (I won’t name names but you know who you are). Whilst I have been working out of Tassie now for eight years and on my own for a majority of that time, we have now established a great team.

“Position Partners is the longest running job that I have had in my life, and I have never experienced this level of support or closeness from my colleagues. I am deeply honored and proud to be this year’s winner. I would like to wish everyone the best of luck in next year’s award, because if someone from a three man team based out of Tassie can do it, anyone can.”