We explore the current situation with grader machine control in Australia, the different options available and why there is still so much to be gained from the technology.

The fact that almost all new graders are fitted with machine control tells us that the benefits of the technology for fine grading applications are well established and widely acknowledged. Machine control technology saves time by reducing or eliminating reliance on pegs and stringlines, it increases productivity by assisting the operator to get to grade faster without rework and it improves safety by removing the need for regular grade checks near working machines.

If the benefits are well known, what are the risks of not having machine control technology for grading applications and why are 80-85% of machines still working without it?

It could be argued that the ultimate success and profitability of a job revolves around the grader. If fine tolerances are not achieved consistently across the site, it will result in rework and extra materials – both costly and inefficient alternatives to getting the grade right the first time. On road applications the costs will really soar if the grade isn’t consistently right, with additional ‘black gold’ required for laying asphalt to even out the surface and additional work for compactors to achieve the right results.

A basic 2D machine control system, the likes of which are now factory-installed on a number of models from Caterpillar, Komatsu and John Deere, connects to the machine valves to automatically hold the blade to the whatever grade or cross slope set by the operator. They can also be used in manual or indicate mode, to inform the operator of the blade’s position in relation to grade, without automatically controlling it. 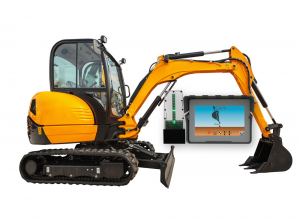 The standard slope sensors that come with a 2D machine control system can be augmented with either laser and/or sonic trackers to provide a height reference and/or grade reference. Height reference does not come as standard on most newly-purchased machines, so discuss this option with your supplier to see if it is something that you may need.

These basic 2D systems will increase productivity at the fine grading stage by 10-15% on standard road applications and they have a far wider impact on a range of other machines on site.

Haul trucks bringing in material, dozers and wheel loaders spreading material and the machines that follow the grader including compactors, pavers and asphalt compactors, will all be more efficient and get the work done faster as a result of the machine control system fitted to the grader. Because the grader is able to get to grade more accurately, consistently and quickly, all other machines are able to move just the right amount of material and only move it once.

Although 2D machine control now comes as standard on almost all graders sold in this country, it is still readily accessible and affordable as a retrofit option for all makes and models of machine. Retrofitting machine control is also beneficial because the system can be swapped between machines, giving the owner greater flexibility while reducing capital expense by extending the benefits of the system to more machines.

3D machine control involves the use of GPS and/or laser levels and total stations to calculate a 3D position for the machine blade and its position on site. 3D technology is mandatory on graders for almost all large infrastructure projects as it involves numerous machines working alongside one another to the design.

3D technology delivers unparalleled accuracy and speed for fine tolerance applications, with results typically well within +/-5mm range. The development of GPS networks such as AllDayRTK enable RTK positioning accuracy without the need to setup and maintain a base station on site. This saves time and eliminates human errors associated with base station setup, while improving efficiency across the project. 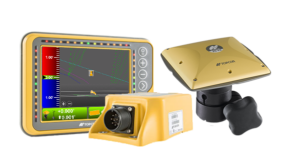 3D-MC2 is the latest product offering from Topcon that involves the use of a super-speed sensor, which updates the blade position more than 100 times per second. This technology enables the operation to drive at much faster speeds, while maintaining the same high precision accuracy as the machine control system instantly detects and adjusts to any changes in the cutting edge position.

Currently, there are no graders sold in Australia that come fitted with 3D machine control from the factory.This technology requires a different level of expertise, operator training and support from a dedicated solution provider such as Position Partners to ensure its success.

3D systems are available to hire, to ensure you have the right system for any given application or project. Some systems, such as those available from Topcon, can be swapped easily between graders or other types of earthmoving equipment including dozers, excavators, scrapers, skid steers and compactors, giving greater flexibility to the plant owner.

As I mentioned before, the benefits of machine control technology, for grading applications in particular, are well recognised throughout the earthmoving and construction industry. The reluctance to embrace it may be based on financial reasons, or a sense that the current setup has worked for many years without this technology and so can continue to do so for many more.

To those arguments, I would suggest the following responses: from a financial aspect, as with all technology, it gets more affordable the longer it has been around. Explore the different options available to you and you may be surprised at just how affordable machine control technology is these days, especially when it can be hired for a particular project and/or swapped between a number of machines across a fleet.

For the ‘why fix what isn’t broken’ argument, I would say that just because something works, it doesn’t mean it can’t be done better or more efficiently. I could send a letter by post to apply for a new job, or I could send an email. My application would get there either way and may be equally well-received, however, while waiting for the post to arrive the job could have gone to another applicant, someone who got there faster.