Blog - Latest News
You are here: Home1 / Position Partners2 / How to Use a Rotary Laser (Step-by-Step)

How to Use a Rotary Laser (Step-by-Step)

So you’ve scoped your job, you’ve chosen your equipment, and you’ve landed on the ever-versatile rotary laser. So what’s next? How do I use it?

In this blog, we’re going to show you the best tips, tricks, uses, and a step-by-step guide on how to set up and use your new rotary laser!

So let’s cover the basics..

What is a Rotary Laser?

A rotating laser (also known as a rotary laser level) is an advanced laser level that spins a beam of lightning-fast enough to give the optical illusion of a solid 360-degree plane. These planes can be horizontal, or vertical. Illuminating not just a solid and static line, but lateral planes.

Not to be confused with a laser ‘measuring tool’ which defines space and distance between multiple objects, or a laser pointer which is used in presentations, or playing for endless hours with your cat; a laser level sends a bright beam of vertical light in the form of a line onto flat a surface with supreme accuracy.

For example, a rotary laser level is helpful whether being used inside or outside. It’s used to determine and continuously show a consistent level of elevation when building up, driving, and/or drilling down.
Most rotating lasers will also self-level – typically when positioned within four degrees of level (depending on the manufacturer). Some will also let the user know if it has been thrown off-course. It’s often referred to as a ‘height alert’ feature – meaning the laser will stop working and alert you if it’s height has been bumped out of level.

Step-by-Step: How to Use a Rotary Laser

A manual level can do the job, but for large construction projects; it’s simply not efficient enough. This is where rotating laser levels become the users’ best friend.

So, take it out of the box, and let’s get started!

Step 1. How to Calibrate a Rotary Laser Level

Congratulations, your unit is now correctly calibrated. Time to get to work!

Step 2. How to Use a Rotary Laser Level

Set up your laser level. This type of level is best used on an elevated flat surface. A tripod is the best choice but sawhorses, buckets, and step ladders will also suffice. 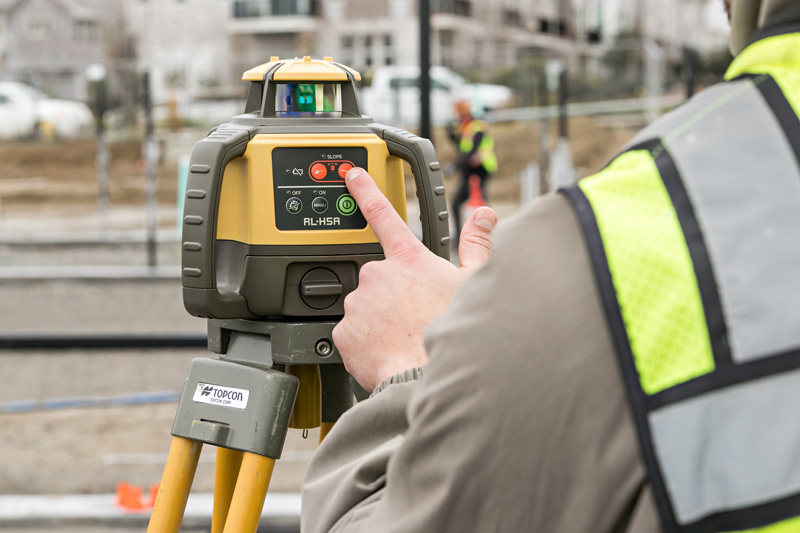 Remember that rotating lasers come with many different battery options. Some laser levels will allow you to connect to a wired socket. Whereas others will be relying on battery packs whilst out on site. So don’t forget to TURN OFF your laser when you have made your markings.
Happy levelling!

For All Your Rotary Laser Needs Pick Position Partners

Position Partners has the tools, equipment, and rotating lasers you need to get your project leveled and underway. Give the team at Position Partners a call today on 1300 867 266 to find out more about how a quality approved and powerful rotary laser tool will benefit your business and future projects.
Don’t forget to explore the full range of Position Partners Lasers and Levels within our online products.