Managing roughly 60,000 to 70,000 tonnes of waste per year, Dulverton is certainly not one of the largest landfills.

Based in Tasmania’s North West, Dulverton is the state’s largest composting facility, processing around 30,000 tonnes of organic waste per year. It’s a relatively small operation compared to its interstate counterparts, but one which follows prudent environmental management. Mat Greskie, Dulverton Landfill CEO, says its landfill operation undergoes rigorous environmental testing. Mat explains that every aspect of the company’s landfill operation is aimed at optimising airspace – which helps extends the life of the landfill and reduces the carbon footprint.

“Unlike many sites that only cap their landfills at the end of the cell life, we use a different capping methodology which is to cap two or three times throughout the year to keep leachate generation to a minimum,” Mat explains.

Mat says he historically relied on surveyors to regularly visit the site and peg out the design waste surface for machine operators to follow. 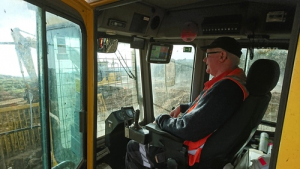 “Regular capping means more frequent surveying to peg out the grade for operators to follow. The process was labour intensive and frustrating, as although the pegs gave the operators a guide, with waste being such an irregular medium, it was very difficult for the operator to tell if they had placed waste to the design” he says.

“The surveyors would then come back, often multiple times, and have to re-peg the grade and the cycle would start again.”

After investigating the company’s options, Mat says they opted for Carlson’s LandfillGrade solution, distributed and supported by Position Partners. Installed on a Bomag BC772 RB-2 compactor, the Carlson machine guidance solution enables the operator to work to a specified design and view real time compaction and grade information on the screen inside the cab.

“We chose Carlson because unlike other solutions in the market it has been designed specifically for Landfill applications rather than adapted from an earthmoving solution,” Mat says.

Another factor in the decision-making process was the availability of technical support.

“Position Partners has a local team based here in Tasmania who have helped us, as well as their team on the mainland that have always assisted us whenever we’ve needed them. They’ve always done their utmost to support us and that is of great value to us,” he adds.

“Our operators have certainly embraced the technology and find it very easy to use, it’s given them the confidence to know they are placing the waste to design and compacting the waste consistently.”

“It’s also saved our surveying costs and our surveyors are pleased with the setup as they simply input designs into the system and then sign it off when completed – there’s far less rework involved for both parties.”

“Landfill waste density is a key performance indicator that is reported up to the Board.

“Introducing landfill machine guidance has certainly helped us to pack as much waste into every cubic metre as possible.” [we are not using the reporting capability of the software at this stage].

As a result, the Dulverton picked up Waste Management Association Australia’s prestigious Landfill of the Year award for 2017 for minimising its environmental impact on the region.