Blog - Latest News
You are here: Home1 / Featured Post2 / Not all positioning solutions are created equal

Not all positioning solutions are created equal

A guide to choosing the right technology, that’s backed by the right level of expertise

Positioning technology is a broad term that encompasses a lot of different options for the civil contractor. With so much choice, including factory fit options from machine manufacturers, aftermarket options by different technology companies and various terms and descriptions that are not used consistently across the industry, it can become a mine field to uncover the right fit for your project.

In its simplest form, positioning technology is anything that assists machine operators, surveyors, engineers and project managers to match the physical landscape or structure to the digital (or, gasp! paper-based) project design. The most common tools used by contractors to do this include laser levels, GPS and total stations, which can be used by surveyors for levelling, set out and as-built checks as well as on earthmoving machines to guide the operator to grade.

In addition to the core trio of lasers, GPS and total stations, there are some new(er) kids on the block that can be grouped into ‘mass data’ solutions. These include remotely piloted aircraft (RPAS) used for aerial mapping and modelling, 3D laser scanners that are used to create a model made up of millions of points (point clouds) and other complimentary solutions such as deformation monitoring platforms that measure minute movements in the terrain or structure. These also help project managers and engineers to track a project’s progress relative to design and tolerances, but they don’t work on machines.

Laser levelling has been used in the construction industry for many decades. It’s relied on by all building trades and numerous earthmoving applications to get to a level or grade, whether you’re pouring a slab, digging a trench or grading a road.

When it comes to using a laser for machine control, there are two different options and they offer dramatically different benefits. Both can claim to offer millimetre precision, but as we’ll see you need to watch for the fine print here:

1) Laser level machine receivers. These are usually magnetically mounted to the excavator dipper or clamped to a vibe pole on a dozer or grader. They act in just the same way as a laser receiver that you’d clamp to a staff, picking up the laser beam and using beeps and LED lights to give the operator some guidance about how far from grade they are. 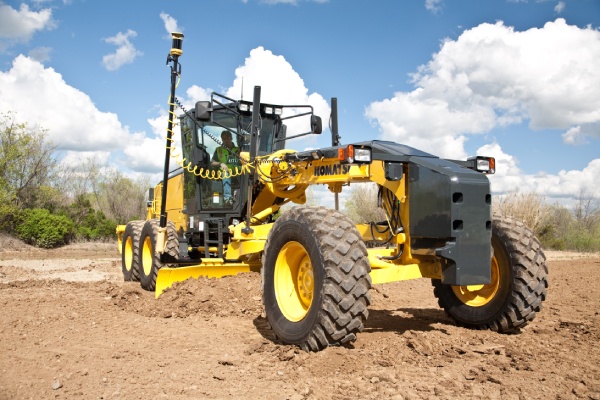 You may hear these receivers referred to as millimetre accurate, which can be misleading when it comes to machine control and earthmoving applications. Yes, it is true that all receivers measure in millimetres, because they have arrows showing you roughly how far you are from grade (usually in 5mm increments). However, they are there as a guide to the operator and are only suited to more basic earthmoving tasks. Certainly more accurate than the naked eye and a stringline, but not what civil contractors would expect for survey-grade positioning accuracy.

2) Topcon Millimetre GPS. The other use of lasers in machine control is in a system unique to Topcon, called Millimetre GPS or mmGPS. This solution uses a combination of GPS positioning and a high-powered laser transmitter to create a working zone on a project that can be used by a range of earthmoving machines, survey instruments and more.

Topcon mmGPS is a full 3D machine control solution that gives the operator real time position to the machine’s cutting edge relative to the project design.  That means it knows its position not only relative to the specific level or grade its working to, but also its exact position on the surface of the Earth. Unlike laser machine receivers, mmGPS doesn’t just give visual indicators to the operator, it automatically controls the machine to the design because the sensors are integrated into the machine’s hydraulic system.

It delivers survey-grade RTK positioning accuracy and is suitable for the tightest tolerance work such as grading or paving a motorway or an airport runway.

GPS technology – more accurately called GNSS which encompasses all the different satellite constellations in space – is widely adopted and commonplace on most civil construction projects in Australia.  As long as there’s clear open sky visibility (and we’ve got plenty of that in Australia), GPS works like a charm to either automatically control the machine’s cutting edge or provide guidance to the operator to accurately work to the design.

Again, there’s a myriad of choice when it comes to using GPS on your machine, such as how you get your RTK corrections – this could be via a CORS network like AllDayRTK, using UHF radios and repeaters, or using the MiRTK internet correction service.

There’s also the setup of your GPS antennas, which can come in either single, dual or twin configurations to offer greater positioning accuracy depending on the machine you’re fitting it to and the work it’s doing. Check out our article on GPS machine control here. 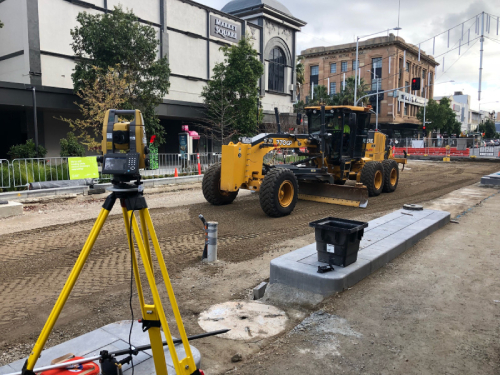 Total stations are highly accurate survey instruments that can be used in earthmoving and paving applications where fine tolerances are required. The system includes one or more prisms mounted to a vibe pole on the machine, with a combination of sensors fitted to the body of the machine and a control box and receiver in the cab.

Like GPS-based systems and Topcon’s mmGPS solution, total station options (often referred to as UTS or LPS depending on the supplier) are 3D machine control platforms that can either automate the machine’s cutting edge or provide indicative guidance to the operator relative to the project design.

Total stations can be more costly than other 3D machine control options, especially if there are multiple machines on site where more than one instrument will be required. They do also require line of sight between the prism and the robotic total station, which could mean up to 4 total stations for one paving machine, and that doesn’t come cheap!

That said, LPS is an extremely reliable and accurate method and a must for jobs that don’t have clear sky visibility, such as working under tree canopy, near skyscrapers, under bridges or in tunnels.

Who’s got your back?

Landing the right technology for your machine is one thing but choosing who you buy it from is arguably even more important. Easy for us to say, as clearly we want you to choose us!

There are a few key things to consider and ask your supplier to make sure you have all the facts.

1) Years of experience – how many years do they have under their belt when it comes to supplying and supporting positioning technology?

Our answer: Position Partners and its founding companies have been supplying positioning solutions since the early 1980s. If you add up our teams’ individual years of experience it stretches into the hundreds and makes everyone feel very old.

2) Diversity of skills – what’s the makeup of their company from a skills diversity perspective? (It takes a good cross-section of core skills to get the most out of the technology)

Our answer: We have 270+ people in our team and approx. 30 qualified surveyors. Three of our company board members are surveyors, including our CEO and our Chairman. We have a huge number of 70+ trade qualified technicians that work in our Service Centres, support and field service teams. Positioning technology is in our company’s DNA and always has been.

3) Geographic reach – where are they based and have they got local support near you?

Our answer: Position Partners has offices in every State and Territory of Australia, as well as New Zealand, Indonesia, Malaysia, Philippines and Singapore. We’ve also got regional support centres in Queensland to ensure that help is never too far away. 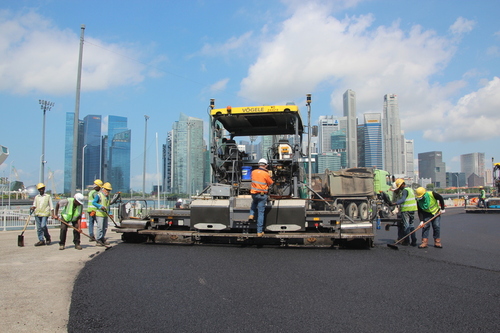 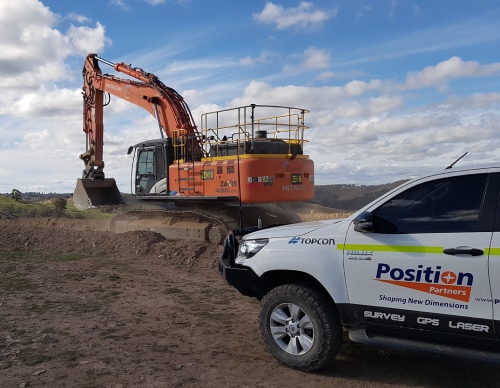 As well as physical, boots on the ground coverage, we have our award-winning remote access platform Tokara. Tokara enables our support technicians and customers to access their machine control and survey equipment from the office to update design files, configure settings and train operators in real time.

4) Scalability and ROI – what are the compatibility options with other machines, can you scale the solution up or down, and can you swap it between machines?

Our answer: Position Partners offers scalable, flexible positioning solutions that can be adapted to suit the project your working on and grow as your business grows. Unlike factory-fit machine control options that will only work on that specific machine, Topcon products can be swapped between different makes and models of the same machine (e.g. from a 200-tonne Komatsu excavator to a 10-tonne Kobelco excavator) or from different makes, models and types of machine (e.g. a grader to a skid steer).

We offer hire options across our fleet, so you can choose to hardwire your machines and hire the components that work for you on that job. For example, you might need a total station (LPS) system for one job because you’re working in a tunnel, or mmGPS for another. Or you might choose to fit a 2D system to your grader as standard and then scale up to 3D if a major project calls for it. It’s all possible with us.

So, when it comes to choosing your positioning solutions and your preferred supplier, we hope to have given you some helpful tips and things to think about. Stay tuned for our series on unique machine installs, from measuring spoil placements on a sea dump machine to controlling pitch and elevation on a concrete texturing machine.

At Position Partners, we’ve got a positioning solution for every machine that shifts dirt. And we’ve never met a machine we couldn’t fit.