Hagstrom Drilling is on the cusp of completing 3 months’ worth of geotechnical drilling investigations as part of Sydney’s major Western Harbour Tunnel and Beaches Link project. As one of NSW’s priority infrastructure projects, this proposed large scale motorway is expected to deliver time savings of up to 45 minutes for motorists travelling from the Northern Beaches to Sydney’s CBD, North Sydney and the airport.

Underwater drilling in Australia’s busiest waterway brought unique challenges that required the team to operate 24 hours a day, seven days a week in order to meet the project deadlines and accommodate stringent operating restrictions. In busy shipping and recreational channels, working at night was often the only option.

Investigations were undertaken in Western Harbour and White Bay, the results of which will help refine the design and planning of the Western Harbour Tunnel. In what’s now becoming a congested space under the harbour with the existing Harbour Tunnel to the east of the Harbour Bridge, along with the upcoming Sydney Metro rail tunnel to its west, the Western Harbour Tunnel is planned further west still. Crossing underneath Sydney Harbour between Birchgrove and Waverton, the tunnel would connect with WestConnex at Rozelle and the Warringah Freeway at North Sydney.

Drill investigations were also conducted in Middle Harbour for the proposed Beaches Link tunnel, which would connect the Warringah Freeway with the Burnt Bridge Creek Deviation at Balgowlah under Middle Harbour.

Hagstrom Drilling is a Perth-based company with offices in Sydney and Melbourne, specialising in all forms of geotechnical, environmental, hydrogeological and exploration drilling, investigation and testing Australia-wide.

With a strong focus on innovation and utilisation of the most technically advanced drilling techniques, Hagstrom Drilling uses DGPS technology to precisely drill to a client’s specified locations and provide accurate on-site and drilling reports.

Working in water depths between 15 and 35 metres deep, the company used three drill rigs and jack up barges to drill up to 100 metres below the sea bed for this project. 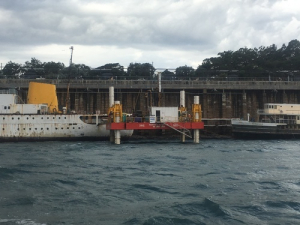 “DGPS technology is critical to provide accuracy in these applications,” André Fuller, Hagstrom Drilling Operations Manager said. “Input from these drill investigations determines the tunnel boring requirements, so it is essential that we get A1 performance from the positioning technology.”

Mr Fuller explained that DGPS units are fitted to the drill masts to give accurate position, relocation and elevation information to the operating crews. “We are consistently achieving +/- 100 mm HRMS and VRMS accuracy and within 1 metre Easting and Northing, which is well within tolerance levels for this project,” he added.

Another requirement for the project was to utilise the NSW Continuously Operating Reference Station (CORS) RTK network, CORSnet, now a requirement on all major infrastructure projects in the state.

Position Partners’ local Sydney team was able to assist with the network connection via its AllDayRTK network, which includes full access to the CORSnet infrastructure along with other government-run and privately owned reference stations throughout Australia.

Mr Fuller said that technical support was also crucial to the project’s success. “Given the cost implications of any delays, it was important to ensure smooth operations as much as possible,” he said.

“Given the challenges of the job, Position Partners’ Sydney team were an instrumental in maintaining system performance and they were happy to be called on outside of business hours as required. That’s something we have valued over the years as our projects are nationwide and Position Partners has a local team in each state and territory so there are always people within close enough proximity,” he added.

With investigations almost complete and the project successfully managed within time and budget, Hagstrom Drilling’s team will soon be packing up and moving on to the next project.