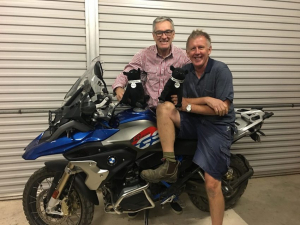 Position Partners is proud to support Robert Bent and Greg Barkla on their Black Dog Ride to the Top End 2018.

Robert and Greg will depart from Castlemaine on 10 August and expect to arrive in Darwin on 18 August. During this eight day motorbike ride, they are aiming to raise awareness about depression and suicide prevention and $10,000 for the Black Dog Institute.

“Depression and suicide is sadly far too common in Australia’s construction industry, with recent studies showing workers in this sector are more than twice as likely to commit suicide as other people in the country,*” Bob Bent said.

“We are passionate about raising awareness of this issue and helping to address the stigma around mental health, particularly in the face of the tough-guy tradie stereotype. Thanks to Position Partners for sponsoring us and supporting such an important cause for our customers and partners in the industry,” he added.

If you’d like to donate to this worthy cause or track Robert and Greg’s progress, please visit: Black Dog Ride to the Top End 2018