Blog - Latest News
You are here: Home1 / Position Partners2 / Robustness and speed of production make the Tiny Surveyor stand out to...

Jon Rasmussen, Director, AME Surveys purchased the Tiny Surveyor from Position Partners for use in the rail line project the team are currently working on. This project involved setting out 200km of rail line. To lay the sleepers down they needed a mark on the ground every 3m.

“It makes life easier! I personally went down and did about 2.5km for the railway line, half of that was on an arc, so marks every 3m and that would have taken at least 10 hours in the field but with the Tiny Surveyor it took 2.5 hours. There’s a definite 4-to-1 ratio there,” said Mr Rasmussen.

“It also frees us up in that it means that the whole job is now for one surveyor, whereas otherwise one day a week I would have had to put a second surveyor down there.”

“The first part of the solar farm is where they either drive the piles in or they drill a hole and so you have to put in a point for that and the first time they go through it only has to be within the accuracy that is achievable by the Tiny Surveyor. When we were doing solar farms, we’re talking in the range of 63,000 points,” said Mr Rasmussen.

“Without the Tiny Surveyor we could achieve around 450 points a day, so the surveyor goes along, leans over, put a nail or a dot in and then moves onto the next one. The Tiny Surveyor, I estimate, would be able to do between 1,300 to 1,400 points a day if I upload the points to it and just sent it off on its merry way.” 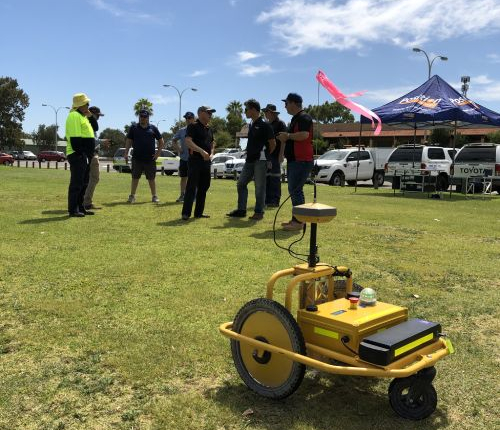 Why the Tiny Surveyor?

What drove Mr Rasmussen to choose the Tiny Surveyor was the robustness and reliability of the instrument. He was able to witness these qualities first-hand when he attended one of the Tiny Surveyor Roadshows held by the Position Partners team.

“I got to see a demonstration of the Tiny Surveyor and that was probably what decided it for me. Seeing it upfront and seeing that it was very well-constructed. The last thing you can afford is for it to break down when you’re quite literally 600km from the nearest major city,” said Mr Rasmussen.

Benefits of implementing the Tiny Surveyor

“When I got the Tiny Surveyor, myself and the main surveyor that’s looking after it, we put it through its paces and checked it on its repeatability, to make sure that after it’s marked out 300m that when we turn it around and tell it to mark it again that it actually goes over the same spots. It certainly did do that,” said Mr Rasmussen.“If a human was doing this same job, they’d have to pause and they’d have to trust that they’re actually getting the pole vertical and that they’re then spraying where the pole was. That they don’t lift the pole up and then accidently mark it 23mm to the right or something like that, so it’s the reliability of the result as well as the speed at which you can do it.”

“My first dealings with Position Partners were with the Perth office and those guys, I couldn’t speak highly enough of them, their service from the support and sales departments, their knowledge of their equipment and the Brisbane office is proving to be the same, they’re proving to be as good,” said Mr Rasmussen.

“I certainly enjoy working with Position Partners – they know their stuff. They really want you to do the job well.”

Started in 1997, AME Surveys is a survey company which focuses on road and civil construction, with strengths in construction set out, quality management, computer modelling and machine guidance.