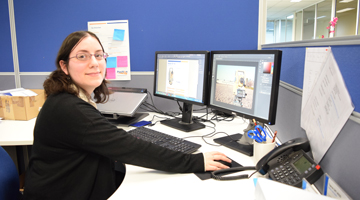 Cynthia Papadopolous joined Position Partners thanks to disability employment agency Wise Employment. Originally employed to help with some marketing admin such as direct mail and brochure printing, Cynthia has taken on more responsibility in recent months and is using her training in graphic design to put together brochures, flyers, digital advertising and much more. We are very proud to have Cynthia as part of our team and she is a great asset. Wise Employment recently put together the article below to celebrate Cynthia’s success: 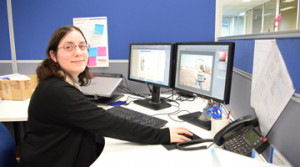 Cynthia flourishes in first job as graphic designer despite anxiety

Having a job and working in a team has helped Cynthia to better manage her anxiety both in and out of the workplace.

Before she came to WISE Employment Parramatta in late 2015, Cynthia’s anxiety had formed a seemingly insurmountable barrier to the working world. She was eager to find work, but for three long years her search for employment as a graphic designer was plagued by self doubt.

Cynthia and her WISE Consultant worked together to develop her resume and began investigating possible roles that would gel with her interest and skills. Local employer Gina Velde, Marketing Communications Manager at Position Partners, had just such a role and after a successful interview it was all Cynthia’s.

Fast forward six months and Cynthia is doing well at work, building her skills and contributing to the creative projects the team delivers. “In the six months Cynthia has been with us we have extended her days and responsibilities so that she is doing more of what she enjoys and developing in her career,” said Gina.

“She’s always very positive and has a can-do attitude. It’s been great to watch her develop in her role,” she added.

Cynthia said that working has helped her confidence and made it easier to talk to new people. “Now that I’ve got a job and am working in a team I feel less anxious in other situations. I’m a bit more outgoing and chatty, and I think I’m happier too,” she said.

Her Mum Helen agrees, saying she’s seen big changes in Cynthia since she started at Position Partners. “Cynthia used to be very shy but now she’s coming out of her shell, she talks more and shares her opinion. By going to work and mixing with other people she’s learning new social skills. I’m very happy for her,” said Helen.