Blog - Latest News
You are here: Home1 / Position Partners2 / What Are The Options For GPS Machine Control?

What Are The Options For GPS Machine Control?

3D GPS machine control is now a common sight across most major civil projects Australia-wide. Used widely across a huge array of machines, from scrapers to graders, excavators, wheel loaders and everything in between, GPS is a flexible and accurate solution that enables all plant across the site to get to grade as quickly as possible with minimal wasted material.

In this article we look at the following topics:

Here are some examples of applications where GPS machine control can be used: 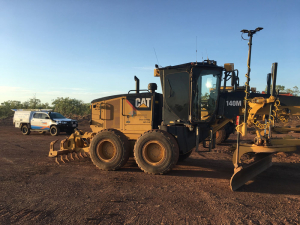 So, pretty much everything.

What is the difference between GPS and GNSS?

Technically, GPS is the abbreviated name for Global Positioning System, the United States’ satellite constellation. But it is only one satellite constellation out of an increasing number, including Russia’s GLONASS, China’s Beidou, Japan’s QZSS and India’s INSAT systems, which all vary in terms of their size and availability.

Although GPS is commonly used to refer to satellite-run technology generally, GNSS (Global Navigation Satellite System) is a more accurate term as it incorporates all satellites, in all constellations.

Long story short, they are 2 different terms people commonly use to describe the same thing: satellites in space that deliver positioning information to computers on Earth.

Fun fact: Australia is a pretty great country as we know, but another thing that makes it great is that it is able to access more satellites, from more constellations, than any other country on the planet due to geographic position. So that makes GPS an even better option for many construction and infrastructure projects.

How does GPS work on a machine?

There are a number of different components that work together to give accurate positioning information of the machine’s blade/bucket location relative to the design it’s working to.

GPS antenna or antennas: mounted to the top of a mast on the machine’s blade, at the back of an excavator or even on the roof of the cab in some of the newer mastless machine control systems.

Machine sensors: depending on the machine and the application, these include tilt sensors, rotation sensors and mainfall sensors and together they deliver an accurate 3-dimensional position of the machine’s cutting edge using GNSS positioning information from all available satellites.

Control box: a display unit mounted inside the cab of the machine to give the operator live information about where the machine is relative to where it needs to be based on the 3D design it’s working to. The difference between these positions is known as the cut/fill. Depending on whether you’re working with an automatic or manual (indicate) setup, the cut/fill can be sent through the machine’s hydraulics to automatically move the blade to the design.

Base station or RTK network: This provides an accurate cross-reference for the GPS antennas on the machine. Because the machine is in motion, it needs to continuously update its position information using the satellites. You’ve probably noticed your car GPS or your phone is only accurate to within a few metres when you’re on the move. That’s where a base station comes in: because it’s not moving its position is ‘fixed’ so it continuously talks to the satellites and the machine’s GPS to communicate where the machine actually is to within a few millimetres.

GPS Receiver: Located in the cab, the GPS receiver is the heart and soul  of the machine control system. It turns all the GPS data from the satellites and signals from the base station into a real position on the ground that is then paired with the machine sensor data to give the machine’s blade or bucket tip its true location 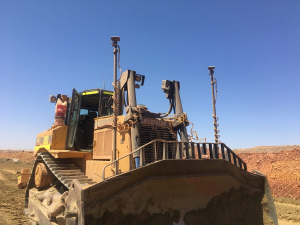 What are the pros and cons of single-antenna GPS?

Single GPS machine control is unable to work in reverse, the machine must be moving forward for it to maintain accuracy.

If you’re working on a steep slope, for example, and the machine is crabbing, a single GPS setup may result in an elevation error because the machine is moving at an angle rather than forward.

What are the advantages of a twin GPS antenna machine control setup?

Two antennas mean two 3D positions, which enable the system to always know the direction (or heading) of the machine. Add a rotation sensor and the machine control system will know the blade orientation at the same time, to give greater accuracy.

Twin GPS gives more accurate elevation than either single or dual GPS, especially when working on changing mainfall grades. Twin combines an accurate position of where the blade is relevant to the machine, as well as where the machine is relative to the Earth’s surface, which means that it is extremely accurate even on steep slopes. It’s important to note that any errors in your calibration or setup will be magnified significantly when working on steeper slopes, so twin GPS gives the operator peace of mind that accuracy will remain consistent.

Topcon is the only manufacturer to offer twin GPS machine control solutions. It is also fully compatible with other 3D and 2D positioning technology.

Why would you use a dual GPS antenna machine control setup?

Dual masts are most commonly seen on excavator machine control solutions. These machines, unlike most other plant on site, don’t move forwards and backwards while they work, the pivot instead. Putting a mast on the two back corners of the machine means the system always knows the position of the boom, because the boom and the tail of the machine always face the same way.

In grading applications, a dual mast setup eliminates the need for rotation, slope and mainfall sensors. It does this by placing an accurate 3D position at each end of the blade, so it always knows the position of the cutting edge and the direction of the blade.

The only thing to note as a potential limitation of a dual mast system on a grader, is that unlike a single or twin setup, you cannot easily switch to other types of machine control technology such as laser, sonic tracker, or total-station controlled systems without first installing the rotation, slope and mainfall sensors. You also have to be careful when working on very steep slopes when the antennas might be at a greater angle from the sky and therefore unable to track as many satellites.

When should you use GPS instead of laser, total station or sonic tracking technology?

GPS is a very versatile tool that lies at the heart of many 3D machine control solutions. Its advantage is its flexibility, combined with its accuracy, particularly when it comes to Topcon systems which are designed to be multi-platform and multi-machine compatible.

Topcon GPS machine control gives you the option to:

The only drawback to GPS is that for it to work accurately, you need access to open sky so the system can draw information from as many satellites as possible. If you’re working under dense tree coverage, in very built up areas or underground, laser, sonic tracking or total station-based systems are the way to go.

Here’s a quick table to outline all the options for Topcon GPS machine control: