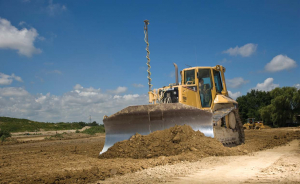 GPS-based machine control is rapidly revolutionising the civil construction business, through the cost savings and productivity improvements it’s allowing. And almost as a side effect, it’s revitalising the small to mid-size dozer market.

“We are finding with small sized dozers – the small Komatsu, John Deere, Case, Liebherr and Caterpillar machines – that GPS-based machine control plus a PAT blade is becoming a tool that they’re using on subdivisional work, on road jobs and so forth,” he said.

“It allows them to easily push material around, with speeds and precision similar to that of a motor grader.

“As everyone knows, the industry is experiencing trouble now getting operators for motor graders, but with dozers being easier to operate, plus the increased productivity with 3D machine control, contractors are using dozers to finish off batters and windrow material out.

“Because of these factors, the dozer market is really taking off, with more and more operators utilising automation; that’s increasing productivity because operators are able to get across the ground a lot quicker, and it reduces the amount of rework that has to be done.”

Katsanevas said that Topcon’s introduction of its forthcoming 3D-MC2 dozer system at Conexpo – which will allow dozers to carry out trim at speeds comparable to graders – would add to the versatility of dozers.

“With previous systems, dozers have had to trim in first gear, but when 3D-MC2 becomes available, they will be able to trim at double the speed and twice the accuracy.

“The end result is you will have a really versatile machine- and one that’s much easier to operate than a grader,” he said.

“Already with our existing systems, we’re finding that a lot of the batters done by machine control dozers are really not having to be touched now – so the graders are just coming through at the very end and cleaning up the formations and so forth as they should be doing – which is keeping everything a hell of a lot cleaner.”

“With the D6R with the PAT blade, we’re using it for a number of applications, such as subdivisional work, where you’ve got rock retaining walls with cuts of up to 2 to 3 m high on 800 square metre pads.

“It works really well for pushing our trimmings out, plus the scraper has a much easier job picking up a long windrow instead of a short heap – so it’s actually working really well,” he said.

For use on dozer PAT blades, Topcon has introduced a dual GPS mast, running two GPS receivers on the one mast, looking after elevation, blade roll and blade angle.

“This ability to roll the blade – on both dozers and graders – and still maintain the correct elevation, is a major advantage,” said Katsanevas.

“This means that operators can be sure that the cutting edge is cutting to design level even with the blade rolled, giving a nice clean edge to the precise elevations,” he said.

“All this means that very quickly I think we’ll see dozers utilised from bulk earthworks right through to the final trim – and only then will the motor graders will come through and finish off.

“This will give contractors tighter control on the job site; as the motor graders will be coming through and utilising their Millimetre GPS technology.

“This will take them away from doing all that bulk work, so the contractors can give that back to the dozers – and the graders will just do the trimming and cleaning up, which is what they’re designed to do,” said Katsanevas.