Next Generation Paving at Singapore Airport

Singapore’s Changi Airport is one of the world’s biggest and busiest airports, a major gateway to and from Asia. In the coming years, the airport is set to double in size with the addition of a third runway and two additional terminals (T4 and T5), with T4 planned for completion in 2017. By 2015, the airport is planned to cater for a staggering 135 million passengers every year.

The airport’s third runway entails extending and upgrading an existing military runway to the southeast of the airport, to enable its use for larger passenger aircraft. Joint venture Samsung C&T-Koh Brothers has the contract for the first phase of this project, which includes paving, drainage, security fencing, perimeter roads, mechanical and electrical works and other support services.

United has the sub-contract for paving works on the new runway and the team has selected Topcon’s new SmoothRide start to finish paving automation solutions to increase productivity and ensure accuracy at every stage. This includes Topcon’s Millimetre GPS solution on four paving systems, Topcon C-63 intelligent compaction solution for two compactors and SmoothRide surface profiling and scanning technology for two SAS vehicles.

As the first installation of Topcon’s new SmoothRide solution in Asia Pacific, local Topcon machine control dealer Position Partners pooled its expertise from the company’s Singapore and Indonesia branches, along with representatives from Brisbane and Sydney in Australia, to ensure the system was set for success from the first pass. 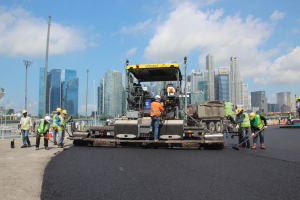 Mike Forrest, Managing Director of Position Partners’ Singapore branch, said the team worked effectively to ensure the installations and testing were done as efficiently as possible. “Led by Jeff Bratton [Australia Technical Support], the team showed a level of professionalism and team work, the like of which I have never before encountered in over 30 years in the industry,” he said.

Graeme Casen works for Position Partners Indonesia branch and assisted with the machine installs, while Eng Ming, based in the company’s Brisbane office and with extensive experience in paving automation, gained invaluable experience on the new system. Hanif Santoso from the Indonesian office assisted the team and gained training to be able to lead the engineering aspects of future installations.

The job was not without its challenges, as Jeff explained there were a few instances where a bit of lateral thinking was required: “Unbeknown to us before we began, tow bars are actually illegal in Singapore, which made installing the RD-M1 surface scanning system a little tricky given it’s designed to fit to a tow bar,” he said.

“A few of the weld-on components were also missing from the kits, which meant we needed to make them on site using scrap metal, but the systems were installed successfully and the new system is working perfectly,” he added.

Once installation was complete, the team conducted on-site training on the setup and user of the mmGPS paving system, as well as the survey rovers for collecting as-built data.