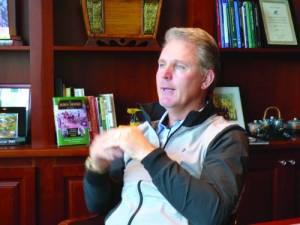 O’Connor was recognised “as the champion of surveying and positioning technologies in the world, having served in this industry for more than two decades.  He has transformed Topcon into an acknowledged market leader in surveying technologies related to civil engineering, agricultural, mapping, and measurement applications.”

In addition to receiving the award, O’Connor was a speaker at the conference and Topcon executives also participated in applications and technology workshops.

About his selection as Geospatial Business Leader of the Year, O’Connor said, “To be selected by the leaders and visionaries of the industries we serve is an incredible honour.  At Topcon we focus our energies on pursuing products and technologies that truly make a difference in the lives of our customers and potential customers.

“We work closely with our global distributors, customers and strategic partners to ensure we are not only providing exemplary products, service and support, but also are focussing our efforts on developing the next generation of precision instruments and technologies in every market segment we serve,” he said.

The award certificate presented to O’Connor at the conference, read: “A leader, technocrat and, above all, a man of vision, (O’Connor) is recognised as the champion of surveying and positioning technologies in the world.”

The award certificate further stated, “Topcon Positioning Systems is one of the only companies to offer ‘the complete solution’ from survey to finished grade,” and that the unique corporate culture he created and instilled into his team “has resulted in the innovative integration of technologies under one roof, causing radical changes throughout the construction positioning industries.”

The magazine’s award also noted that under O’Connor’s leadership, “Topcon has evolved a unique corporate culture of unity with diversity, which has enabled its executives to pursue (large) corporate objectives while focusing on respective technology domains and territorial geographies.

“Professionalism with human touch is an added value to his corporate leadership.”