Completing the picture with RPAS

Coastwide Civil, based in Albion Park, south of Wollongong, New South Wales, is the primary contractor on a complex harbour excavation project at Shellharbour, on the NSW south coast. The new boat harbour forms part of the Shell Cove development project and, upon completion, will include 300 wet berths and a platform for associated harbour-side development and facilities on the 20-hectare site.

In addition to the new marina, Coastwide Civil is also contracted for remodelling and plant relocation as part of the Bass Point Quarry expansion project, located just to the south of the Shell Cove site. The company is also running two subdivision projects adjacent to the new marina development, along with a major road upgrade that connects the new site with Shellharbour village. 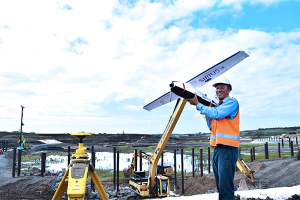 Managing these five sites is Scott Rogers, Head Surveyor and a Director of the company. He and his team have invested in the latest survey and machine control technology to enable them to work as productively and efficiently as possible while keeping track of progress across all projects simultaneously.

Mr Rogers’ team first invested in RPAS technology in 2014 with a multi-rotor solution, to enable them to document the Shell Cove project and survey inaccessible areas. More recently, the company expanded its aerial mapping capabilities with the addition of a RTK-enabled fixed wing plane, the Sirius Pro by MAVinci, and is experiencing significant time savings and improved project documentation as a result.

“The marina project is a large site that involves a number of different designs and a variety of materials, including excavation in an acid sulphate environment and old tip waste removal,” Mr Rogers said.

“The RPAS solutions caught my eye when I received a marketing email from Position Partners, who we’ve had a good business relationship with for many years. I thought they could be an ideal solution for this project and save a lot of time compared with traditional survey methods,” he said.

Scott uses a Falcon 8 multi-rotor RPAS by Ascending Technologies to conduct daily stockpile volume reports across the site. The fixed-wing Sirius Pro is used for site-wide end of month surveys for the marina project, quarry, sub-divisions and road upgrades.

“Both systems are equally good in terms of performance, but I find they are better suited to different applications,” Mr Rogers said. “The Falcon 8 is perfect for conducting smaller aerial surveys and doing my daily volume reports,” Scott said. “It saves my team a considerable amount of time as the stockpiles on the Shellcove project are 3000-4000 cubic metres, which makes them difficult and dangerous for field survey crew to survey on foot.”

“I simply head out each day with the Falcon 8 and use the ‘Quick Survey’ feature to map the stockpile in five to ten minutes,” he said. “There’s no need for a laptop or any other equipment and as soon as I’m done the stockpile can be sent to the crusher. It’s a very fast, efficient and safe way to survey.”

The fixed-wing Sirius Pro is better suited to larger-scale sites, Mr Rogers explains. “The fact it doesn’t require ground control means I can conduct a full site survey in an incredibly short amount of time, without needing to interrupt working machines.”

Using RPAS technology for the site survey delivers comprehensive data and accurate historical documentation at each stage of the project. “Because there are so many types of material on the marina site and the fact that we are over-excavating areas of the harbour floor in order to backfill it with waste material, keeping accurate records of what has been placed and where, is important,” he added.

He said this level of visual documentation simply wouldn’t be possible with traditional survey methods. “Traditionally you would document the material types and quantities, but having the ability to go back in time and visually look at any given stage of the project is very powerful.

“On the marina project there are many vertical faces on the harbour floor. It is important to keep accurate survey records of these as it impacts upon the future design harbour infrastructure. Because we have complete models from each month, it is easy to check that everything is constructed to design and we can easily show this data to the client at any stage, now or in the future.”

For the quarry surveys, Mr Rogers supplies the data to his client, Hanson, for them to use and manage internally. “Each month I give Hanson the latest design file, which they upload to a new web- 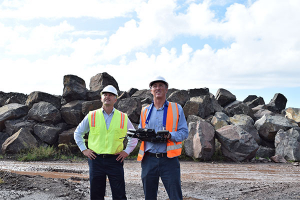 based solution called Propeller that enables them to share, visualise and survey the data without needing any further input from my team. It’s another example of a deliverable that you wouldn’t get from traditional methods,” he said.

Scott explained that the monthly aerial surveys save about a day’s work each month and are a far safer and more efficient solution to traditional survey methods. “I usually do the end of month surveys on a Friday and setup the post-processing to run over the weekend so that I have ready-to-go data sets on Monday morning to complete my invoices with,” he said.

Using traditional methods, the same process would involve two and a half days of in-field data capture with a survey crew, followed by a day of data analysis. “Although the end result for getting invoices done would be the same, the data I have from the RPAS is comprehensive,” said Scott. “I can conduct fly-throughs of the entire site in a 3D, virtual environment from my office using Virtual Surveyor software. I can see each layer of rock, clay and topsoil at the click of a mouse. As each material has a different pay rate, it makes working out quantities for invoicing so much easier.”

Scott found the learning and CASA certification process wasn’t as difficult as people might assume. “Yes, there’s a process you have to go through and regulations you have to abide by, you can’t just pick up one of these systems and start using it. I attended a fast-track, 7-day course with Position Partners and once you’ve completed the training and got your licence you’re all set. Using the RPAS and extracting the data is a very simple process.”

As with any new technology, receiving support and training is all-important. “We’ve been well looked after by Gavin and the team at Position Partners, they are always on hand if we need them. We had a technical fault with our first system and they kept us running by conducting surveys for us while the plane was getting repaired,” Scott said.

Another time-saver that keeps Scott and his team in the office and away from the heat and flies on site, is the use of telematics to remotely manage the designs on earthmoving machinery across the project.

“We use Topcon GPS systems across a number of dozers, excavators and graders on site and Position Partners’ Tokara Link system enables us to login to each machine from the office to update the machine to a new design file or troubleshoot a problem,” he said.

Tokara Link removes the need for surveyors to visit a machine in person and transfer a design file via a USB to the control box. Instead, they simply connect to the machine using the Internet and transfer the design remotely.

“Tokara is a great solution and it saves us a lot of time,” Scott said. “If an operator is having technical problems, we try to solve it ourselves first but if we need help, the team at Position Partners in Sydney simply logs in from their office and most of the time we can resolve the problem without anyone actually needing to go out on site and visit the machine.”

Looking at the plans for all five projects that decorate Mr Rogers’ walls in the site office, it is impressive to see how he manages them simultaneously.

“The bigger the jobs get, the better this technology is for you,” he said. “I couldn’t do without it now and I simply wouldn’t be able to run the projects in the same way without it. The RPAS technology in particular is a real game-changer – it’s had a huge impact on our business for the better.”