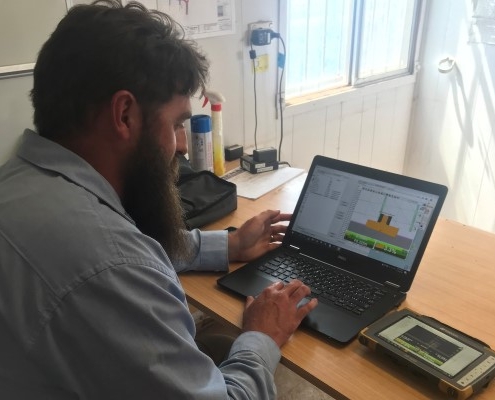 “Nearly all the machinery we’ve got on site here has got a Topcon GPS/GNSS from Position Partners in it so they’re all working to design levels, we’re also using a Phantom 4 drone that we purchased from Position Partners which is giving us weekly quantities and lets us know how we’re going production wise,” said Mr Lawrence.

Why did Menai Civil choose technology from Position Partners?

Mr Lawrence chose technology from Position Partners because it’s easy to use, easy to train operators to use and it just works.

“We chose to use technology from Position Partners, especially the GPS/GNSS machine control technology, for a few different reasons: Tokara, the remote support system, the Position Partners service and the Topcon gear itself,” said Mr Lawrence.

“I use Tokara every day to log in to machines and fix problems no matter where I am.”

How does Menai Civil find the machines work with the Position Partners technology?

Mr Lawrence and his team will often move the Topcon units between multiple machines depending on what they’re working on and the application they need to complete. Mr Lawrence has found that when he moves a Topcon unit between machines, he can upload machine files, change the radio frequency, change the network login and any other settings, with ease when using the Tokara remote support tool.

“As well as being able to access our own machines through Tokara, we do use sub contract machines and it is preferable that they’re running Topcon and Tokara systems in their machine because it means we can connect to those guys as well, we can get access through Tokara and I can set those guys up as well with our design files and whatever else they need,” said Mr Lawrence.

“Tokara is a big stand out because at the moment I don’t believe that any of the other options out there have anything like it, so that’s a big part. But also, the service, the service has always been great that we’ve got from Position Partners.”

What benefits has Menai Civil seen since implementing technology from Position Partners?

Mr Lawrence has found  an increase in productivity and that the machinery on his site is a lot more efficient and more productive using Topcon GPS/GNSS and Tokara remote support from Position Partners.

“We have found that our machines are a lot more productive running the Topcon machine control systems from Position Partners and Tokara especially is great because we don’t have anywhere near as much downtime, we don’t lose productivity because I can login remotely, I don’t have to go to the site, I don’t have to run around, I don’t have to have to actually physically be at the machine to be able to upload files and that’s great,” said Mr Lawrence.

“I can be on our site on the other side of Sydney and get a call from an operator or a supervisor on site and I can access the machine straight away and generally I can fix the problem they’re having or upload the files that they need.”

How does Menai Civil use Tokara on site?

Prior to implementing Topcon products and the Tokara remote support tool from Position Partners, Mr Lawrence would have needed to physically be at his machines a lot more frequently, to stick a USB into the machine and copy files/upload the design, change settings on the machine, calibrating the machine and troubleshoot any problems such as a faulty sensor or a cable that might not be plugged in to a sensor.

“I run Tokara directly on my FC-5000 field controller. I’ve found that it’s been a very useful tool because I’m carrying it with me all the time: I’m in the field, I’m in the car and I can just pull it out and log into any machine, anytime and it’s always worked great and I use it every day.”

Mr Lawrence also uses Tokara remote support as a tool for training new operators as he can remotely log into the machine rather than crowd into the cab to conduct training, which has seen an increase in productivity on site. This means he can stand a safe distance from the machine while remaining in constant contact with the operator.

“I can be looking at their screen while not physically in the machine and talking them through how it works, what they should be doing, how calibrations work,” said Mr Lawrence.

“Also, I can be calibrating the machine, measuring buckets up, putting the measurements into the pad instead of having to run between the machines or yell out to the operator, put measurements in and checking levels around the machine without having to go to and from the cab. It’s very, very efficient and helps to limit downtime.” 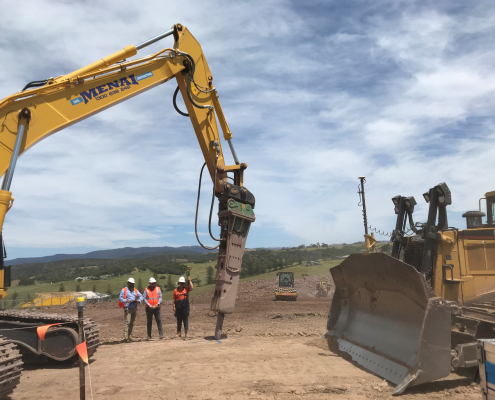 “I am the first port of call for any of our operators that have issues with their machines, which is okay, I can login remotely, I can fix most of the problems they’re having,” said Mr Lawrence.

“If I can’t fix a problem they’re having, it’s great to have that back up of the Position Partners support team, who’s there and they’re generally able to fix our issues and do it quickly and efficiently.”

Mr Lawrence said he would definitely recommend Position Partners to anyone looking for a partner in GPS/GNSS machine control.

“We would not purchase a system that does not have remote access and at this point in time and the Position Partners’ Tokara system is the only one we’d look at purchasing,” said Mr Lawrence.

Brendan Lawrence has been the survey manager at Menai Civil for three years. Mr Lawrence manages the survey on site which involves set-out, looking after sub-contractors, training the operators how to use the GPS/GNSS systems, training the team on site on using rovers and setting up the projects.