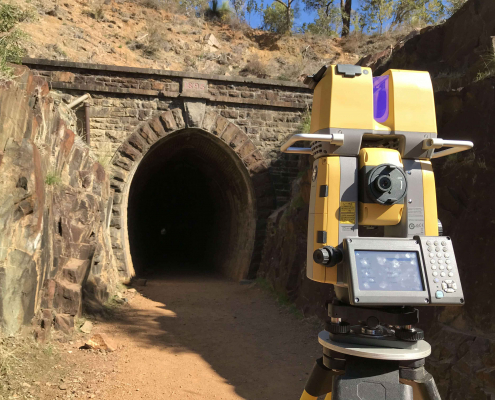 Ideal for a wide range of applications including infrastructure, mining and even forensic survey tasks, Topcon’s GTL-1000 combines the advantages of a one-person robotic total station with a terrestrial 3D laser scanner.

“There are many types of survey jobs where a combination of both technologies would be an advantage,” said Paul Malatzky, Scanning Market Development Manager for Position Partners.

Ideal applications for this technology are widespread, including but not limited to: Building Information Modelling (BIM); feature and detail capture on roads, intersections, roundabouts, and linear infrastructure; as well as tunnelling and forensic work.

“With this innovative system, users can quickly take a 3D scan of the environment to enhance the data collected with traditional optical surveys,” he added. “Road lines, telecommunication lines and other critical assets that are challenging to survey traditionally without road closures and added safety measures can be scanned with ease,” he added.

Paired but not compromised

Unlike other hybrid systems, Topcon’s GTL does not utilise the robotic instrument’s EDM to complete laser scans. Instead, the instrument comprises a high-performance total station and a 3D laser scanner that work independently. This results in faster performance from the laser scanner.

“A total station’s EDM, no matter how sophisticated, cannot perform anywhere near the speed of most 3D laser scanners on the market today,” Mr Malatzky said. Topcon’s solution, according to Mr Malatzky, offers the advantages of both technologies without compromising the performance of either.

Users of the Topcon GTL-1000 can easily create a workable 3D model of the interior of a building using the on-board 3D laser scanner. By combing the hardware with extraction software such as ClearEdge3D EdgeWise, the GTL-1000 provides a fast and cost-effective solution for BIM surveys.

Feature and detail surveys for roads and infrastructure

When conducting feature and detail surveys on roads, intersections and roundabouts, the Topcon GTL-1000 provides a wealth of valuable data.

For intersections and roundabouts, the Topcon GTL-1000 can eliminate the need for road closures and increase safety by removing surveyors from the road. Road lines, power poles, conductor lines, street signs, fences and other assets can be scanned and documented within minutes.

The new Topcon GTL-1000 can be effectively used to survey tunnels and underground mine sites, with the ability to extract detailed information of the direction, shape and volume of advance. Services and other assets within the tunnel can easily be extracted and measured from the point cloud.

For crash investigation purposes, the Topcon GTL-1000 can be setup using Topcon’s unique Hybrid positioning resection to provide immediate georeferencing for the scene.

3D laser scans provide context to the motor vehicle(s) position on scene, whilst precise robotic measurements can be taken to measure the track of the vehicle(s) involved, before and after the impact.

Looking ahead to other survey applications

Mr Malatzky adds that Topcon’s GTL-1000 is also ideal for construction verification applications. “Although this workflow is not yet a requirement for Australian projects, much like BIM it is likely to become more widespread in coming years with Europe and North America already adopting the practice,” he said.

Instead, he argues that as-built documentation and quality assurance are key drivers for adopting this new technology today. “The GTL-1000 will offer tangible efficiency and productivity gains in the applications we’ve explored and many more,” he said.

Enquire about this product here