As an everyday practise, we have seen industrial services adopt the use of drones. Whether it is to accurately survey a construction site or to inspect remote infrastructure, The use of drones in construction has become increasingly popular as a way of safely and accurately getting field data to inform decisions on site.

Drones have become increasingly popular in support of mining applications with exploration, surveying and mapping. Australia and Africa have led the way in adoption of unmanned aerial vehicles (UAVs) across their mining industries to maintain safety, increase oversight and enhance security.

Position Partners offer a range of surveying drones for sale that are ideal for 3D aerial mapping, LIDAR mapping, photogrammetric surveying and aerial photography applications. Our remotely piloted aircraft system (RPAS) solutions, with VTOL capability, are safe and accurate for hundreds of industrial applications. We provide survey-grade UAVs from leading suppliers including Intel, DJI, Quantum Systems and more. You can trust that our drones can offer real-time kinematic (RTK) or post-processed kinematic (PPK) aerial mapping data.

Position Partners RPAS VTOL solutions, which are fixed-wing survey drones, have an absolute accuracy of +/-2-5cm when flying at a height of 100m off the ground, with a flying time of 90mins and range of 7.5kms. That means that you can survey a massive expanse of ground to a true measurement that is only, at worst, 5cm out from the real measurements. These RPAS are able to survey about 250 hectares of land in a single flight. This is an unbelievable advancement in surveying – given that you used to be limited by traditional laser equipment or theodolites and were limited to land based, human-operated equipment that extended 400m at the absolute most.

Position Partners multi-rotor drones operate around the +/-5cm accurate level. Like all surveying equipment – accuracy is expressed as a certain centimetre or millimetre difference from the survey to the real-life measurements, + or – at a specified distance from the device. So in the case of drones, usually the flying height is expressed as 100m high – with an accuracy of between 2-5cm at that flying height. Flying the drone higher than 100m would therefore decrease the accuracy. As all of Position Partners drones for construction use photogrammetric technology to map the ground by taking thousands of high-resolution images of the ground below and transposing them on top of one another using photogrammetric software, then the reference to accuracy is how accurate those images are at recreating the topography of the ground below in 3D or 4D. 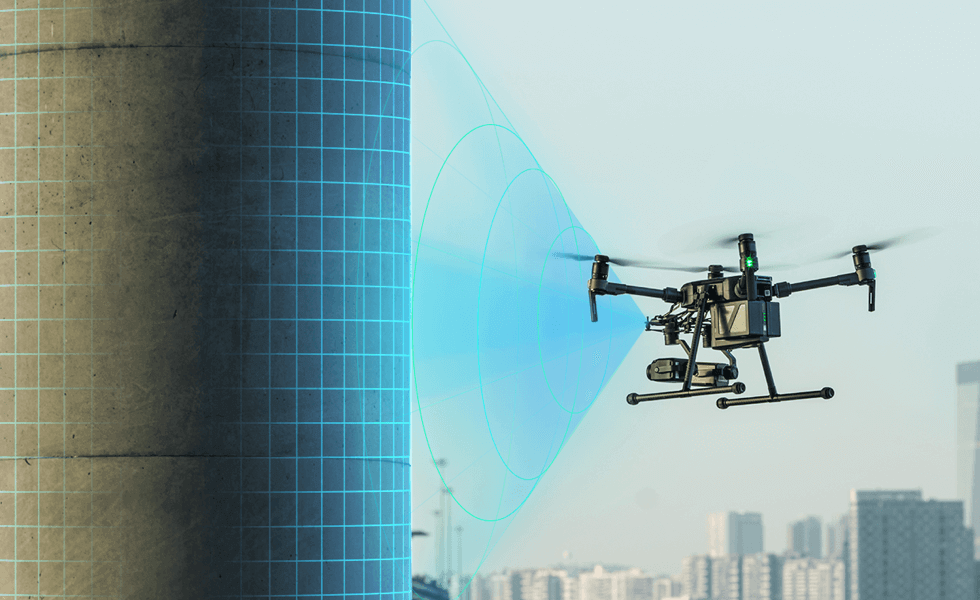 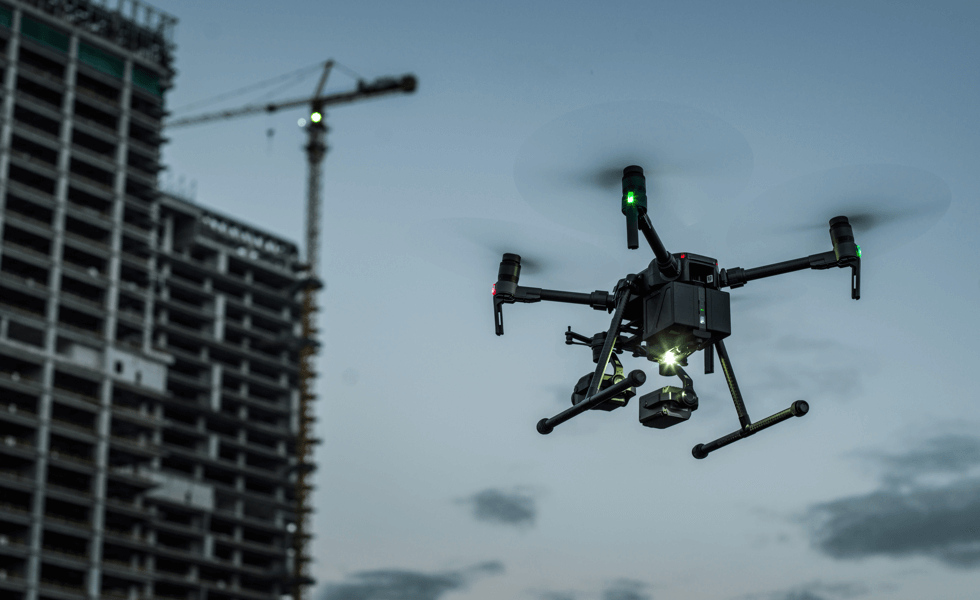 Within this idea is another concept – called ‘Ground Sampling Distance’ – which is the relative pixel size on the ground of the images that are being created by the camera at 100m flying height. Typically, GSD of every pixel is the equivalent of 2 centimetres on the ground, provided you are flying the drone at 100m above the ground. As a guideline – vertical accuracy is 3 times GSD, depending on the flying conditions.

The drone delivers a payload, including a camera and sensors into the air, and the camera faces directly down taking thousands of overlapping images during its flight path. The images overlap to a degree of 70% – which means every measure of the ground below is captured in thousands of overlapping photographs. Every single point on the ground appears in 12-13 photographs in any one single flight – which is then imported into a photogrammetric survey software package, such as Agisoft Metshape. The software package imports the thousands of images, as well as the RTK onboard logs of the drones relative position and any logs from group points, and picks out the centre most point of the photograph, ultimately stitching together the photos to create an orthomosiac map of the area.  This is called an Orthophoto – which allows you to look down at the job – through a triangular mesh, digital elevation model or point cloud.  The software is also able to create 3D and 4D models.

An alternative to photogrammetric survey equipment is the use of Lidar and laser scanners – which is still a popular process for surveyors – however, the advancements in photogrammetric cameras and the software that process the images has come in leaps and bounds to the point that is widely regarded as more accurate than Lidar – which used to be the gold standard for all survey equipment.

Who can fly a construction survey drone?

Construction drones, which are frequently used by trained surveyors and other licensed and unlicensed construction professionals, have revolutionised the ease of aerial surveying and geospatial mapping over large expanses, by producing accurate reports, improved safety conditions and lower costs per square kilometre of surveyed ground. UAVs now give us the capability to survey the topography and massive expanses of land, where on-land surveying would take months, and could indeed be difficult or impossible given the terrain. Construction companies are especially interested in using drones to see the bigger picture on site and gather real-time project data.

The visual data produced from drones for construction via photogrammetric surveying capabilities ensure that site managers are regularly informed with quick updates on how work on the site is progressing. Drones can be your eyes in the sky – this is particularly useful for major roadworks or oil and gas projects where your site can stretch kilometres from your site office.

The Australian Civil Aviation Safety Authority (CASA) allows anyone to fly a drone that is ‘sub 2kg’ in weight. This rules out all categories of survey drones outside of small multi-rotor drones. This means that anyone on a construction site can operate the smaller drones provided they comply with CASA drone standard operating procedures – called SOP. Broadly speaking – CASA SOP means you must have a visual line of sight with the drone at all times, fly it below 400ft in the air and outside of controlled airspace.

If you are seeking to fly a drone that weighs more than 2kg, which many survey drones do – then you are needing a Remote Operators Certificate from CASA – and some of the above stipulations are loosened up in order for you to fly RPAS drones such as fixed-wing drones across longer distances, out of the line of sight.

You must never fly a drone into controlled airspace without prior approval of CASA – which is difficult to obtain. Contact your local branch of CASA for information about flying drones in and around airports, flight paths or military areas if necessary.Drones

Why are Drones used in Construction?

Once your construction drone has successfully collected all the project or topography data over an expanse, either using photographs or using Lidar scanners, it can be inputted into a software tool or platform – click here to review Position Partner’s range of survey software. The raw data will then be translated into something readable and usable like a drone survey map, orthophoto, point mesh or 3D model. As construction projects are highly complex with many layers of oversight, design and management, you will need to choose a software tool that best compliments your business workflows.

The role of Ground Control Points, and RTK/PPK in Drone Survey Accuracy.

There has been increased demand for highly accurate data returned from survey drones in 3D and 4D, using the onboard camera or Lidar technology. Survey grade drones, the kind sold by Position Partners, tend to have an accuracy of about +/-5cm or less at 100m flying height. These drones are using onboard real-time kinematics, or RTK, to provide relative positioning information using the satellite network in real-time. This increases the accuracy of the data coming out of the photogrammetric or Lidar equipment and gives position information that can be relied upon in the process of assessing the photographs using the photogrammetric survey software. The RTK device on the drone is communicating with a base station, on the ground – and together with GPS are able to provide a very accurate position of the drone relative to the ground.

Prior to RTK technology being the industry standard, surveyors using drones would place crosses on the ground at a specified distance, that had a known coordinate – and these ground points would help to anchor the survey data to physical coordinates on a map. These weren’t easy to place on the ground where the terrain was dangerous or difficult to reach.

Post-process kinematic or PPK – is going through the same process in positioning as RTK, but it’s storing the data as it goes, and the logs of which are uploaded into the software at a later date (rather than ‘real-time’ communication as in RTK).

What does it cost for Construction Drones?

Our drones for constructions are priced depending on their ability to lift certain payloads, generally speaking, and range in cost from $10,000 – $60,000 depending on the size of the unmanned aircraft itself, the onboard battery and other operational features. Payloads can be purchased and affixed to the device, or come fitted with standard payloads that can be upgraded to include additional sensors. Higher-end survey drones that include Lidar sensors are generally priced from $55,000 – $90,000. 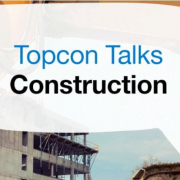 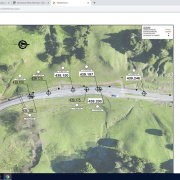 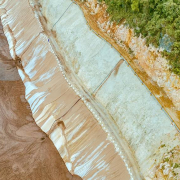 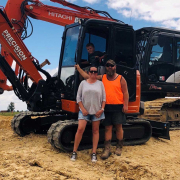 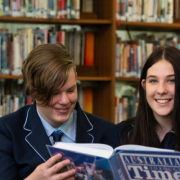 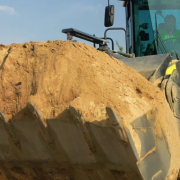