Maintenance of a building over its lifetime is reported to cost more than the building’s original construction. Knowing where underground services and building assets accurately sit is a challenge that can add time and cost to any work carried out. Old plans, many of which are original paper designs or mud-maps can often prove unreliable as more often than not, assets are repositioned during the build. Reliable facilities management data that includes accurate location information can help facilities managers better plan their maintenance actions and reduce costs.

The older the structure, the greater the challenge and the less accurate original plans are likely to be, if indeed they even exist or are still available. In expanding and frequently changing environments such as schools and colleges, where new facilities need to be added or existing structures modernised, the property manager faces added complexity.

GIS consultancy firm OMNILINK provides asset management services for more than 85 schools and colleges in Australia and New Zealand.  By combining data from existing plans and its own data collection, OMNILINK delivers an integrated package to property managers with location information of underground, building and room assets via its well proven AssetWhere™ software (pictured below).

In a ground-breaking pilot project, OMNILINK is working alongside positioning technology experts Position Partners to transform the way assets are identified and managed for buildings and services in educational institutes in particular.

“Our aim is to make asset and property management easier and more accurate for property managers,” explained OMNILINK Executive Chairman, Edward Garvin.  “School properties are large and complex, where there are a number of structures of varying age on a single site and a lot of missing information.

“With the help of Position Partners, we aim to prove that through a combination of new technologies we can deliver a more accurate and comprehensive result and significantly reduce the amount of time it takes to survey the site.” he added.

Position Partners CEO Martin Nix, explained the increasing demand for Building Information Modelling (BIM) services that do not rely on potentially out-dated plans. “We have been following the BIM trend both internationally and in Australasia, so when the opportunity arose to work with OMNILINK we explored the ways they currently collate asset data for schools and the potential for new technology to automate this process,” he said.

“We wanted to understand the impact and cost benefit of using a combination of these technologies to collect a thorough data set that incorporates underground, structural and aerial perspectives,” Mr Nix added.  “The benefits of having live data showing where assets really are, rather than where they should be according to a plan, are enormous.”

For the Riverview school project, Position Partners undertook a number of sample scans in areas of the college where accurate asset location information is lacking. 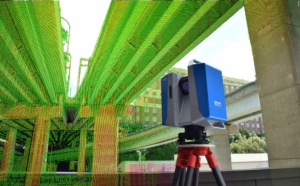 A Faro Focus3D X330 laser scanner was used to capture data in part of the heritage listed main school building. Ryan Kent, Position Partners NSW Survey and GPS Sales Consultant, was responsible for this part of the project.

“I took 10 scans throughout 26 rooms of the main school building, as well as the façade of the front of the building and some of the archways and courtyard area behind it,” he said.  “The Faro scanner has collected information about the overall building and room structure including room sizes, doorways, ceiling heights and so on, as well as all of the internal assets such as light fixtures, sprinklers, heaters and skirting boards.

All of the heritage-listed detail including the finials, archways and ceilings was also captured, along with all existing artwork and antique furniture in the rooms.

“The Faro scanner is ideally suited to BIM applications because unlike survey grade scanners that capture data in sections, it completes a 360-degree scan at up to 976,000 points per second, to distances up to 330 metres away,” Mr Kent added. “It captures the floor, roof, walls and everything in between so that you can stitch together numerous scans and create a walk through of entire buildings.”

Mr Kent explained there is a 1:1 ratio of time in the field collecting data and time in the office cleaning it and post processing it. “Four hours in the field will mean around four hours of cleaning the data and preparing it for output into other applications such as OMNILINK’s AssetWhere™,” he said.

US Radar’s Seeker SPR was used to scan a footpath corridor, small field and parking apron at the school, where underground assets were unknown.

“Currently the school has no plans of the underground services in these areas,” explained Position Partners GPR Specialist Justin Coe.  “The GPR system records underground assets such as pipes made of concrete, plastic or metal up to 4.7m deep with a +/- 15mm resolution.

“Although we didn’t do so it for this sample survey, the Seeker can be modified for different structures to detect assets behind walls or in the ground to depths of 30 metres.  It all depends on the terrain and the application,” he added.

Position Partners attached a Topcon GR-5 GNSS receiver to the Seeker SPR unit to provide accurate X/Y coordinates for all of the underground services detected, in addition to their depth.

Mr Coe completed 20 runs over the three areas in 45 minutes. He explained a major differentiator of the Seeker series is the ability to store and process data for use in BIM applications.

“Most GPR systems are spot locators that do not store the data, they just show up any anomalies when you are out on site,” he said. “With the Seeker series, you get the benefit of both: you can see the data on screen as you walk the run, but you can also bring it back to the office and stitch together a number of runs to a single file, for use in BIM work.”

Mr Coe believes the use of GPR will increase rapidly in the coming years. “Underground mapping is the final frontier,” he said. “There is extremely limited information about underground services and the mud maps that are currently used are often inaccurate or don’t even exist.”

For the aerial mapping stage of the project, Position Partners used the Falcon 8 rotary-based UAS by Ascending Technologies to complete a small survey of an oval on the grounds.

“We chose to use a copter UAV because we are only surveying a small area of the school and the Falcon 8 delivers the perfect mix of portability, precision and ultimate GPS position hold,” explained Gavin Docherty, Position Partners UAS Manager.

Mr Docherty flew the Falcon 8 at a height of 80 metres, with 60% photographic overlap. “This will give us a pixel size of around 1.5cm with a vertical accuracy of 45mm and horizontal accuracy of around 30mm,” he added.

Setup and flight time totalled no more than 20 minutes and covered an area of around 20 acres. “Most of the flight planning was done on site where I could do a reconnaissance of the area and assess wind speed and direction, potential hazards and so forth,” Mr Docherty said. “The flight took about 10 minutes and I just packed up the UAV into its custom back pack and headed back to the office for post processing.”

Although only a small sample survey was taken at the time of writing, Mr Docherty explained that soon he would undertake a comprehensive aerial survey and model of the entire college, including fences, solar panels and other roof assets, tree coverage and topographic information.

Mr Garvin added that it was the potential to combine the three technologies and their various data outputs into a single homogenous package in OMNILINK’s AssetWhere™ software that would really deliver results for OMNILINK customers.

“The combination of these technologies can provide more detailed and accurate information for property managers than ever before,” Mr Garvin said. “With more detail, captured faster and more efficiently, the property manager has all the information at his or her fingertips. This enables them to ensure minimal service disruptions when work is being carried out, get accurate building quotations, better plan for new facilities, landscaping and so on, to name just a few examples.”