Airscope, a Perth-based inspections and asset visualisation company, was enlisted by Santos to provide large-scale virtual models of its facilities in the Cooper Basin, South Australia.

Airscope needed to source the best drone technology to complete this project and found that Position Partners’ Intel Falcon 8+ drone was the only drone up to the task.

“When looking for the best drone for modelling these challenging landscapes, we compared 37 different aircraft that all claimed to be up to the specifications we needed,” said Francois Alberts, Chief Controller, Airscope.

“When Intel’s distributor, Position Partners, showed us the Intel Falcon 8+ drone, we found it to be the only aircraft which met our expectations, for its reliability, stability and true 3D modelling capabilities.”

Airscope used Position Partners’ Intel Falcon 8+ drone to extend these benefits further by developing computer-generated 3D models of entire hydrocarbon processing facilities off the North West shelf of Australia and in the Cooper Basin, effectively bringing the field into the boardroom for more effective asset management.

Position Partners’ Intel Falcon 8+ is a multi-rotor-style drone that is able to capture hundreds of aerial images per flight. These images are then collated and stitched together to form a holistic 3D model through a process known as photogrammetry. 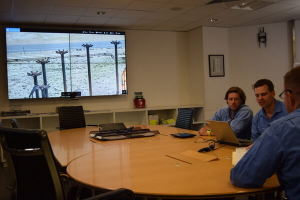 The accuracy of image captured by the Intel Falcon 8+ means that Airscope can incorporate laser scanning data into the photogrammetry making the model accurate enough for use in detailed engineering design of major infrastructure projects.

“Intel is committed to producing high quality, commercial-grade drones that will excel in challenging environments such as the Moomba Gas Plant,” said Anil Nanduri, vice president and general manager, Drone Group at Intel.

“Looking ahead, we will see a greater focus on automation of both the data capture and more importantly data analysis. This will unlock the ability for greater analyses and inference of large data sets that will be captured entirely by drones, allowing businesses to reduce operational expenses by assessing and predicting maintenance needs.”

For more information on the Intel Falcon 8+, visit Position Partners.