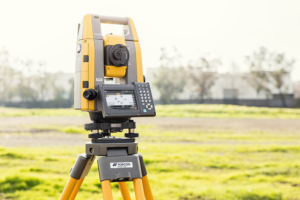 Connelly & Associates Surveyors are a Melbourne-based cadastral survey firm that offers services throughout the greater metro area as well as regional Victoria. Having recently upgraded one of the company’s robotics to the new Topcon GT series, Senior Surveyor Luke Considine said it came out top of all the brands they tested.

With some twenty staff including full time and casual employees, Connelly & Associates Surveyors specialises in all manner of cadastral survey work including subdivisions, boundary surveys, levels and features throughout Melbourne as well as regional Victoria.

As a Senior Licensed Surveyor for the company, Luke Considine continues to split his time between field and office tasks. Speaking to Position Partners, Luke explained his reasons for choosing the Topcon GT robotic total station when it came time to upgrade an older model robotic.

“Our old Sokkia instrument was about 10 years old so it was in need of an update, but then there was an accident on site where it was damaged so that prompted us to upgrade,” he said. “Unlike a lot of cadastral firms that like to keep consistency with one brand, Connelly’s has a mix of different makes of equipment as our CEO doesn’t want to get locked into one brand.”

When researching which model to purchase, Luke explained he tested out a few of the leading brands. “All of the instruments were fit for the job, however I just felt most comfortable using the Topcon GT and I particularly like the new FC-5000 tablet and MAGNET Field software as well,” he added.

Luke added that some of the other brands felt “over-engineered” and too complicated. “One of the models we trialled could only be used as a 1-person instrument, and although I often do use it that way I wanted something that had the flexibility to be used in a one or two-person crew.”

Comparing the new GT robotic with the older instrument, Luke said: “the Topcon system is obviously a lot faster and more responsive than our 10-year old model, and it maintains lock very well so it keeps up with you and you can get through work quickly,” he said.

What Luke enjoys most about the new system is the increased functionality and clarity of the FC-5000 tablet paired with MAGNET Field. “The Field software is really easy to use and has lots of great features such as automatic solutions for resections that save time,” he said.

“Viewing data on the tablet also gives me a lot more detail so I can see the line work and numbers, not just a series of crosses,” he added. “The FC-5000 feels robust and it also doubles as a tool I use to check my email and receive design updates from MAGNET Office. It’s a great survey tablet.”

For office work, Luke explained he’s an experienced Civilcad user who has now migrated to MAGNET Office. “I have used other software platforms but I find MAGNET Office easy to use and ideally suited to the work we do,” he said.

Luke said the support he’s received from Position Partners has been great and was also a key factor in the company’s decision. “I got along with the local Sales Consultant who was supportive and didn’t push me into a purchase,” he said. Connelly’s has also taken up a Survey Support & Maintenance contract that includes Position Partners’ unique Tokara remote support technology.

“As the instrument’s new we haven’t had much opportunity to use Tokara but while we were trialling the system someone from the Position Partners team was able to remotely login and show me around a few features,” Luke said. “That was really handy because I’m based in Geelong so it’s not as though they are just around the corner.”

Overall, Luke said the company has been very happy with its decision to add a Topcon GT robotic total station to its fleet. “It’s doing everything we need it to and doing it efficiently. It’s certainly saving me time in the field and making life easier for me,” he added.