All Points Surveys specialises in residential set out work throughout South East Queensland. Having recently upgraded their robotic total stations to the new Topcon GT series, owner Andrew Corfield says the company has improved the workflow between field and  office, saving the team time and money.

“We were running older Topcon total stations and took advantage of a recent trade in special from Position Partners (Topcon’s Australian distributor) to upgrade to the latest model,” Mr Corfield said.

“The speed of the GT robotic is quite something, its performance is dramatically improved compared with the older technology and it very rarely loses lock with the prism,” he added. 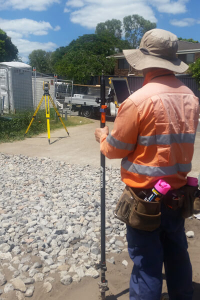 “Having the larger touch screen makes it much more user friendly for our field parties and it’s easy to see the screen in all weather conditions,” Mr Corfield said. “We’ve also added SIM cards to the tablets so that they are more than just a data collector, they are computers with 2-way communication to the office.”

Before upgrading the company’s systems, Mr Corfield explained that at times information was transferred between field and office parties over the phone, whereas now it is done digitally by sending and receiving files via the Internet.

“In the past I would often have to give the field teams point coordinates over the phone, whereas now I can simply send them the file from my desktop and they will have it instantly on their tablet,” he said.

Seamless field to office communication is made possible thanks to MAGNET Enterprise cloud-based technology. It combines MAGNET Office CAD software, with MAGNET Field for the GT robotic and FC-5000 tablet, along with cloud connectivity that enables instant sharing of data files and real-time collaboration between field and office tasks.

“Although I was very happy using my old version of Civilcad, I must admit that the workflow productivity has been greatly improved with the cloud-based system,” Mr Corfield said. “The field guys are young and this technology comes as second nature to them, they picked it up straight away and they love it.”

Mr Corfield said the team needed very little training to get up to speed with the new instruments and software, although he does appreciate the service and support from Position Partners’ local team in Brisbane.

“The latest technology is fantastic, it’s a complete end to end solution and everyone on the team enjoys working with it on a daily basis,” he said. “The robustness of the hardware is impressive – I think you could use it underwater it’s so tough, although I’m glad of course we don’t have to lol!”